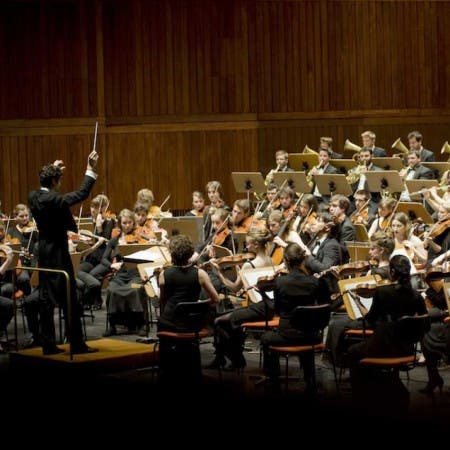 The Gustav Mahler Youth Orchestra was founded in 1986 on the initiative of the famous Italian conductor Claudio Abbado, who served as its artistic director for many years. His aim was to unite young musicians from Austria, Hungary, and Czechoslovakia and thus break down, at least on this level, the political barriers of the ‘Eastern Block’. Then starting in 1992 the orchestra opened to musicians up to twenty-six years of age from all countries of Europe. During annual auditions an expert jury chooses new members from among 2,500 candidates. Today the orchestra is considered one of the foremost musical ensembles of the world; in 2007 it won a prestigious award from the European Cultural Foundation. Repertoire extends from music of the Classical period through works from the twentieth century, with emphasis on composers of the Romantic and Late Romantic periods. The orchestra works with many topflight conductors including for example Herbert Blomstedt, Pierre Boulez, Christoph Eschenbach, and Mariss Jansons, and appears in the most important concert halls and music festivals such as the Musikverein in Vienna, Amsterdam’s Concertgebouw, Suntory Hall in Tokyo, and the Salzburg Festival.