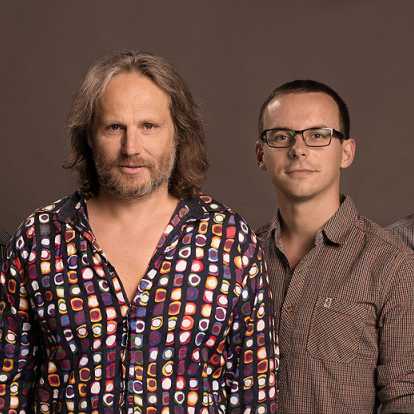 Andrej Šeban is considered one of the najkreativnejších Slovak guitarists with an unforgettable sound. As a supporting player worked with the biggest names in the Slovak scene as they are (or were) Dežo Ursiny and Richard Müller. As a producer he has signed and the album Jana Kirschner and many other titles. He collaborated with a number of Slovak, Czech and foreign musicians: random Jaro Filip, Michal Pavlicek, George Stivín, Oskar Rózsa, Martin Valihora, Gary Husband and Mark Mondesir. In 2012, revived his group Andrej Šeban Band, whose return was met with great response from the audience and critics. The cooperation unexpectedly invited the talented young musicians: Dana Spiner – piano, Peter Rusnak – Bass and Michael Fedora – drums. Group Haje Andrejov songs and compositions that will delight every receptive audience. Andrej Šeban is one of the masters of Slovak music scene and does not attract attention only their musicality and instrumental performances, but also thoughtful and sophisticated technical involvement – because the group is the Slovak scene called for the band with the best concert sound.