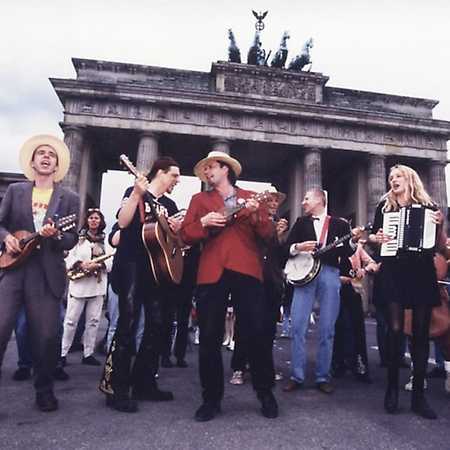 Wim Wenders watched the sky over Berlin, Jaroslav Rudis it under Berlin. Somewhere in the middle but apparently there is a life-giving artistic sludge, where it apparently stuck, as he said years ago drahnými painter Vasily Kandinsky. And for him, unusually multicultural environment also draw 17 Hippies. "After the fall of the Wall as if someone had opened a secret door, from Eastern Europe to Berlin rolled unknown exciting music and we enthusiastically absorbed and did not wonder what we are based on instruments. There was something like a German or German folk music world. And then we came and we all of us have thought that we had gone crazy, "she recalled accordionist Kiki Sauer in the beginning.

The band got together a curious way. “Bring some tools and come to play,” proclamation after the Berlin district of Pankow in the Philippines born half English, half German Christopher Blenkinsop love ukulele sound. 17 Hippies, although you now runs, have certainly nothing to do with psychedelic flower movement, although it is a strange name in the past got into funny situations. “Give me back entrance, I came to hippie music,” she demanded after the concert obstárlá Mánička. “Calm down, Rolling Stones did not have stones,” he explained clarinetist Antje Henkel. – Translated by Automatic service