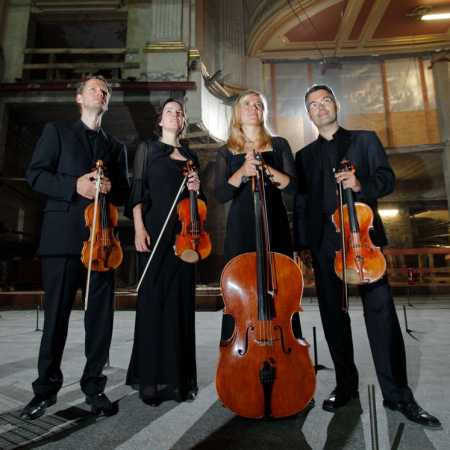 The name of the Tilia-Quartet stems from its seat at the Staatsoper Unter den Linden (tilia = lime tree). Four musicians of the Staatskapelle Berlin have joined forces to form the string quartet here:

Eva Römisch, born near Stuttgart, came to Berlin for violin studies with Uwe-Martin Haiberg and Ulf Wallin. Before the concert exam she became a member of the Staatskapelle in 2002. After attending the special school of music in Berlin and the state music conservatory in Bolzano / Italy, the violinist Andreas Jentzsch studied with Joachim Scholz and Michael Mücke in his hometown Berlin and was a winner of the competition “Musica senza frontiere” (1995). Since 2002 he is a member of the Staatskapelle.

Born in Hamburg, Wolfgang Hinzpeter studied viola with Hatto Beyerle in Hanover and changed to the Staatskapelle in 1999 after his first engagement at the Rheinoper (Duisburg Symphony Orchestra). He has also been a member of the Bayreuth Festival Orchestra since 1998. Also as “Hanseatic dancer”, the cellist Johanna Helm was born in Bremen. After studying with Ulf Tischbirek in Lübeck, she completed her studies at the Berlin University of the Arts under Jens Peter Maintz, she is a scholarship u. a. the Oscar and Vera Ritter Foundation, the Jütting Foundation, the Ad infinitum Foundation and since 2011 member of the Staatskapelle Berlin.

The Tilia Quartet has existed since 2005. In addition to regular appearances in the concert series of the Berlin Staatskapelle and the Berlin Philharmonic, it has been invited several times to international festivals and has given numerous highly acclaimed concerts in Germany and abroad.