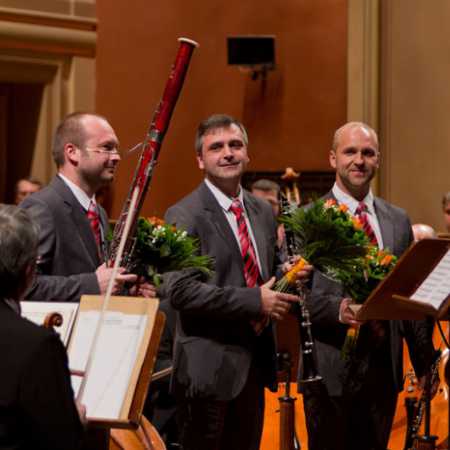 The Prague Wind Trio was re-established in 1993 in the spirit of traditions which have made Czech chamber music famous throughout the world. The trio endeavours to continue the many years’ successful musical career of the ensemble founded in 1966. The current members of the Prague Wind Trio, formerly the Hlávka Trio, working with the cultural foundation of the same name – Zdeněk Rys – oboe, Milan Polák – clarinet, Lukáš Kořínek – bassoon (graduates of the Prague Conservatoire and Academy of Music) have been performing in top professional orchestras for many years. These musicians began playing chamber music in their youth and enjoyed success, both as soloists and in various ensembles, in many competitions where they won top awards (Prague Spring Festival Competition – 3rd prize in 1999, 1st prize in the Young Prague competition in 1992, and in 1993 the ensemble appeared in the international chamber-music competition in Tokyo). The Prague Wind Trio represents the young generation of leading Czech chamber musicians and instrumentalists, performing in concert halls, galleries and castles. To date the ensemble has performed in 300 concerts both in the Czech Republic and abroad (Germany, Austria, Italy, France, Belgium, Japan).