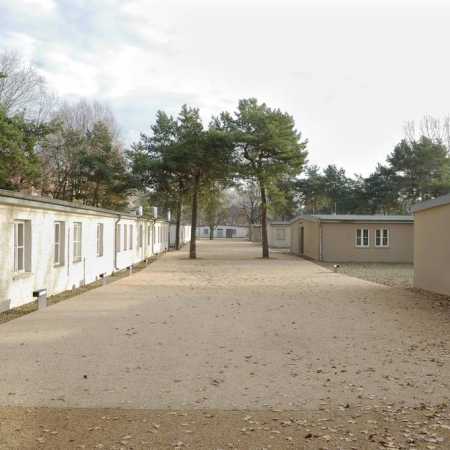 The Nazi Forced Labour Documentation Centre is located in the Berlin district Niederschöneweide in the area of Treptow-Köpenick. It documents the fate of forced laborers in the time of National Socialism and is the only one of its kind in Germany.

The plans for the construction of the living camp started in 1943 with the title „Lager 75/76“. It consisted of 13 symmetrically placed stone barracks and offered space for more than 2000 foreign forced laborers, among them Italian military interns, laborers from Eastern Europe, civil workers and female concentration camp inmates.

1995 the first open air exhibition took place at the site and in 2004 the supporting association „Förderverein Dokumentationszentrum NS-Zwangsarbeit“ was founded. Since 2005 the foundation „Topographie des Terrors“ supervises the project.

Six of the barracks could be preserved. Two of them now host lecture-, exhibition- ad convention rooms as well as library and archive. Besides, there is „Baracke 13“, a well-preserved living barrack with a lot of original traces that is open to the public during guided tours.

In changing temporary exhibitions as well as two permanent exhibitions and lectures, talks with contemporary witnesses, pedagogical offers and guided tours, a continuous and intense reappraisal and documentation of facts about forced labor is taking place.