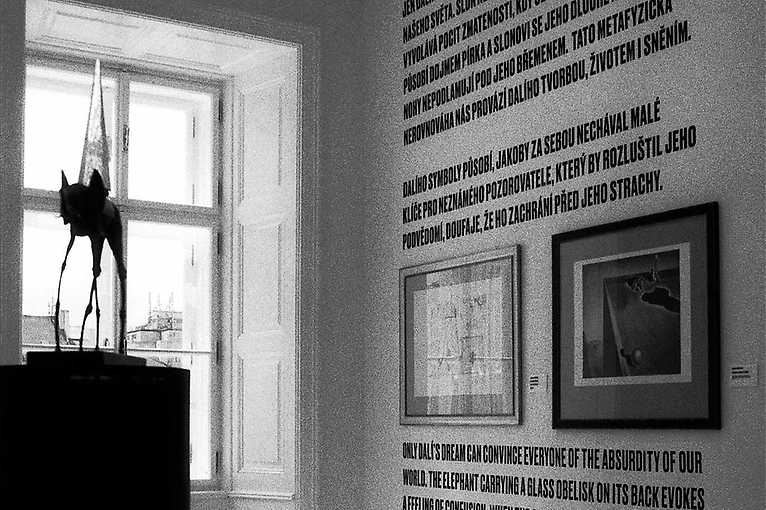 Salvador Dalí, full name Salvador Domingo Felipe Jacinto Dalí y Domènech, was born in 1904 in the Spanish village of Figueres, Catalonia. The family belonged to the middle class. Father Dalí i Cusí was a civil servant, and mother Felip Domènech Ferres originally worked as a maid for her future husband. Salvador had two siblings, younger sister Annu María and older brother Salvador, who died at the age of two, and Salvador believed he was his reincarnation.

Already since childhood Dalí showed signs of painting talent. In 1921, he was admitted to the Academy of Fine Arts of St. Petersburg. Fernanda. Here he met his future friends and colleagues, Luis Buñuel and Federico Garcia Lorca. In works from that period, elements of futurism, metaphysical painting and Cubism can be observed. In 1925, the first individual exhibition was held at the Dalmau Gallery in Barcelona. A year later the painter visited Paris, where he met Pablo Piccaso. Picasso and Salvador were acquainted with Parisian avant-garde artists. According to Diego Velázquez (Spanish painter, leading artist in King Philip IV’s courtyard), Dali had grown his famous mustache. That same year, he was finally expelled from the Madrid Academy. In 1929, he and Luis Buñuele made the film Andaluský pes, which meant an official admission to a group of surrealists.

In the summer of the same year, he had a fatal encounter with Gala, Dalí's future lifelong partner, who greatly influenced his work. In this period, Salvador began to develop a paranoico-critical method based on the spontaneous release of irrational consciousness. The resulting paintings such as Right play (1929) or Perzistence paměti (1931) are his exemplary works. In 1932, Dalí performed at the first surrealist show in the US, which celebrated a triumphant success. Meanwhile, civil war began in Spain, and Dali, renowned for its extreme views, had no sympathy for General Franco’s policy. This has led to disputes with other surrealists. Finally, in 1939 Salvador Dali was expelled from the surrealist group. A year later, he left with Gala to the USA, where he stayed until 1948. In the United States, Dalí published the autobiography of The Secret Life of S. Dalí (1942) and worked for the film, painting for example a sketch for Walt Disney. Upon return, Dalí and Gala settled in Catalonia, where they spent the rest of their lives. At that time, Dalí began composing more religious elements and optical illusions in his works, paintings such as Madona from Port Lligatu (1950) and Ukřižování (1954). From 1960 forward, Dali worked at his theater and museum in Figueres, which he completed in 1974. He has also devoted himself to other projects, such as the Chupa Chups lover logo or furniture design (Mae West’s Actress). He also created his own jewelry collection and perfume.

Dali used a variety of symbols in his surrealist work. The most famous are the flowing watches that were meant to symbolize the relativity of time as described by Albert Einstein. Dalí said he came to this idea when he watched the camembert flowing on a hot summer day. Another symbol was the thin-legged elephants and the rising ant. Ants symbolized his death and fear. These feelings originate in childhood – when he was small, he had a bat as a pet. One day his bat died and Dali found him covered with ants. Other themes are moving in the world of dreams and free associations.

In 1982, Dalí's beloved wife, Gala, died. That same year the painter was promoted to the noble state. In 1989, resigning Dalí dies of heart failure in his museum in the Galatea Tower. He was buried according to his wishes in the crypt of this museum. In the will, he refers all his assets and works to the Spanish state. With scandal and exhibitionist public appearances, they often do not see the depth of the paintings. Dalí refused to eat red food all his life and wore a half-shaven mustache. He liked to do unusual things just to attract attention. Nevertheless, he ranked among the greatest artists with the quality of the work and became one of the most important instigators of new artistic trends of his time.