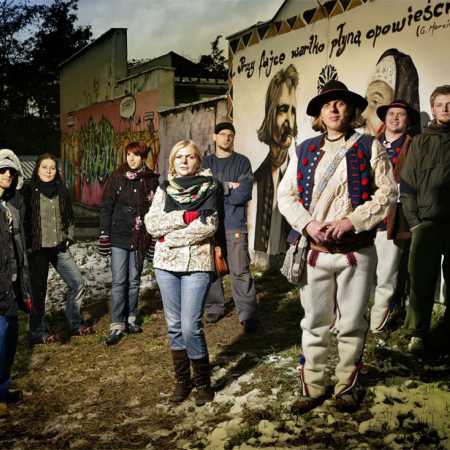 The origins of Psio Crew reach as far as year 2004 in Bielsko – Biała, Poland. The pioneer fusion of traditional melodies with elements of drum and bass, trip hop and dub moved the music scene among the country and abroad, making the joint of original mountain singing with beat box the recognizable characteristic of the band. It is great news for fans of deeply folk rooted eclectic music – after few years of absence – Psio Crew is back!

The debute album "Szumi Jawor Soundsystem“ ("Sycamore Sough Soundsystem“) released in 2007 – as it sais on it’s cover – "arised from need of creativity and joy of experiencing music of old and new times“. It is a proof, that music has no barriers, and can unite and multiply audience.

In 2006 the band got I award of Majówka Tatrzańska i Zakopane (Poland) and III award during Nowa Tradycja Feistval (New Tradition) organized by Polish Radio. In 2007 the "Machiner“ award was achieved for "most inetersting debue“ and in 2008 Psio Crew was nominated to the "Fryderkyk“ award in two categories: Ethno/Folk album of the year and New Face of Phonography.