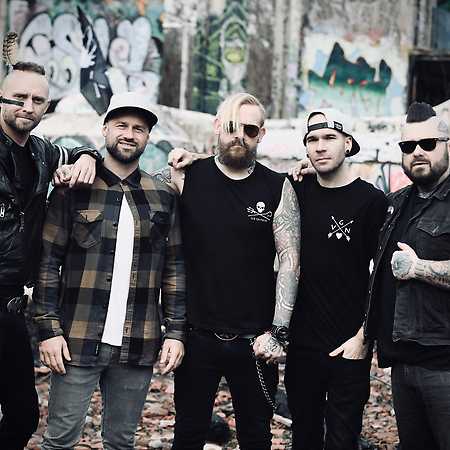 Pipes And Pints  Raise Our Flag

Pipes and Pints are a Celtic punk band from Prague, Czech Republic, that formed in 2006, combining Punk rock with Highland bagpipes.

Pipes and Pints were formed in 2006 by Vojta Kalina (Highland bagpipes/vocals) with a dream of a band that combines punk rock with dirty folk music such as The Pogues. Soon after, he met Tomas Novotny (guitar/vocals) who shared the same dream, flavored by country and rock and roll. The band released a demo and toured Central Europe (Germany, Austria, Czech Republic, and Slovakia) both as a headlining band and in support of The Porters, Society Parasites, and others throughout 2007 and 2008. However, the vision of the future for Pipes and Pints was not shared by all of the original members and a line-up change resulted in the addition of Lukas Vincour (drums/vocals), who moved to Prague from Moravia; Syco Mike (lead vocals), who canceled his return from Austria back to native California and moved to Prague with only his dog Tequila; and eventually Ondra Balvin (bass/vocals), a good friend from the streets, squats, and clubs of Prague. Together they have released two studio albums up until today, Until We Die (2009) and Found and Lost (2012).