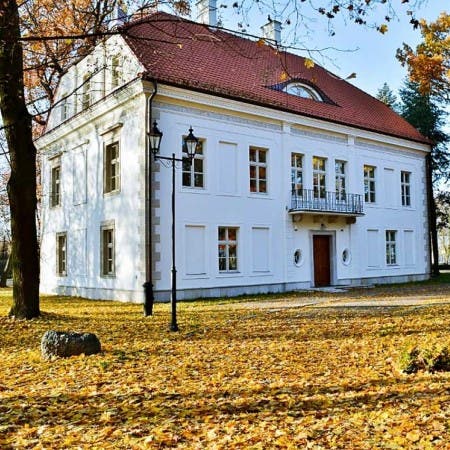 The first reference of Chrzęsne comes from 1525, from the time of Prince Janusz reigning in Mazovia. The inspection of the demesne carried out in 1565 shows that a manor and solidly built mansion with a small garden existed already in that place. Initially Chrzęsne was a private property of Canon Jan Wojsławski, who has received the demesne for his service to the ducal court. In 1533 it briefly became the royal domain, and in 1571 it returned again for more than fifty years into the hands of the Wojsławski family. In the twenties of the seventeenth century, the estate was acquired by Stefan Dobrogost Grzybowski, repeatedly a Member of Parliament, chamberlain and the governor of Warsaw and Kamieńczyk. Just for him in 1635 an imposing headquarters, referring to Warsaw suburban palaces of the 1st quarter of XVII century was built, and this date is considered as the beginning of existence of the palace in Chrzęsne. The new building was placed on the location of the old wooden mansion existing in days of the original owner, Jan Wojsławski. From its inception until the World War II, Chrzęsne was owned or remained under the care of twelve owners or administrators. Among the characters worthy to remember were Wincenty Koskowski, who has acquired the demesne in 1859, and his youngest daughter Wincentyna Koskowska, who took over the palace after the death of her father.