Manuel López-Gómez is conductor from Venezuela and one of the most exciting talents to emerge from Venezuela’s internationally renowned music program, El Sistema.

Following hugely successful debuts with the Los Angeles Philharmonic, Orchestre Philharmonique de Radio France and Gothenburg Symphony, Manuel is increasingly recognized not only for his ground-breaking work as Music Director of El Sistema in Colombia but also as a guest conductor of visionary and inspiring capabilities.

Manuel López-Gómez began his musical life in violin, piano, chamber music and composition. He performed in the violin section of the Simón Bolívar Orchestra for many years, where his talent for conducting was noticed early on and nurtured by his mentor Maestro José Antonio Abreu. Following early projects assisting Gustavo Dudamel both with symphony orchestra and opera projects (La Bohème, La Traviata and Don Giovanni), Manuel has distinguished himself as a conductor in his own right.

As well as his work in Colombia, Manuel visits South American orchestras regularly including the Simón Bolívar Orchestra. Active also in opera, he conducted the world-debut of the recently orchestrated opera Atahualpa by Carlo Enrico Pasta in Lima, Peru, where he shortly returned to conduct a production of Gounod’s Roméo et Juliette.

In October 2014, Manuel assembled and conducted an orchestra of various El Sistema musicians for a televised performance at the UN General Assembly in New York City, with Lang Lang as soloist.

Highlights from the 2014/15 included his return to the Orchestre Philharmonique de Radio France as well as performances with the Royal Liverpool Philharmonic, Brussels Philharmonic and most recently the Nordwestdeutsche Philharmonie and Württembergische Philharmonie in Germany. He began the season with his debut at the Royal Stockholm Philharmonic, performing Wagner and Dvořák. In the summer of 2015, he conducted a production of Il Viaggio a Reims at the Rossini Opera Festival in Pesaro, Italy.

He looks forward to conducting engagements with the San Francisco Symphony, Pacific Symphony, and further afield the Seoul Philharmonic and Sydney Symphony orchestras. 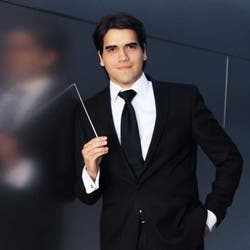 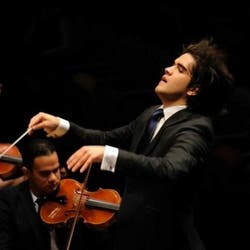