Machine Head's groove-thrash metal band from Oakland, California. cSkupina was founded on the ruins of thrash legends Vio-lence in the American Oakland in 1992. founding member and main brain of the band from the beginning Robb Flynn (vocals, guitar) which joined Adam Duce (bass) Logan Mader (guitar) and Tony Costanza, which soon replaced by Chris Kontos. The first album was released in 1994 under the title "Burn My Eyes" and the metal scene revolutionized. The band intertwined traditional thrash metal riffs with rolling hardcore and Robbův singing ranged from řvavého Singing vocal melodies. Despite various problems with drummer permanently on the drum stool settles Dave McLain (ex-Secred Reich). The second album "The More This Change" published in 1997 and two years later the third album "Burning Red" on which the band opted for the new wave of nu-metal bands and put more emphasis on melody. In this spirit continues on the album "Supercharger" from 2001. Return to the roots takes place in 2003 with the album "Trough The Ashes Of Empires", which is excellent in all aspects, warmly received by critics and Machine Head shows us in a position in which It suits them best.

Machine Head has always breaking down the barriers of metal and whatever their album was more mainstream and not always well received by fans, always kept his personal style, which over the years have built. In 2007 they released another album "The Blackening".

The album garnered huge success and has been in several polls declared the best metal album of the past decade. It includes such pieces as the memory of the late Dimabeg Darell Aesthetics of Hate or hit Halo. The band are fashioning a new order, the songs on the album reached footage and 10 minutes, and were by then in Machine head unusually melodic. In various interviews Robb Flynn emphasized Dave McClain as their secret weapon as the melody is concerned. During a tour to promote the album and the band members have experienced cabin fever when Robb with Duce received often in conflict, which is solved by going to therapy.

In 2009 there was a short pause devoted to composing material for the next album. It eventually came out in September of 2011 and was named Unto the Locust. Album was linked directly to The Blackening. The songs carry a greater emphasis on melodic solos and treats even where it was not possible to Blackening. The album garnered great acclaim and high ratings throughout the world. At the end of the tour (early 2013), however, comes the sad news for all fans when Adam Duce - bass announces his departure from the band in which he worked for more than 20 years. Even before the album The Blackening wanted to leave at that time was not persuaded, but during the recording Unto the Locust did not get any opportunity to enroll on their album lyrics and decided it was time to go forward. The band declared bankrupt after time in his place and announced the release of a new album at the turn of 2013/2014. Became the new bassist Jared MacEachern, who was previously in a band Sanctity. Already in 2013, Machine Head played several concerts in the new report as part of the traveling Rockstar Energy Drink Mayhem Festival. 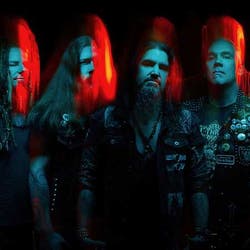 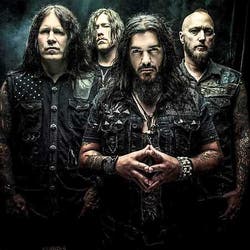 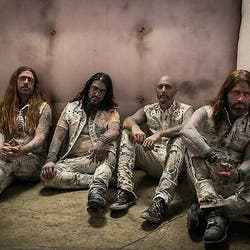 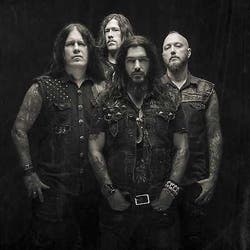