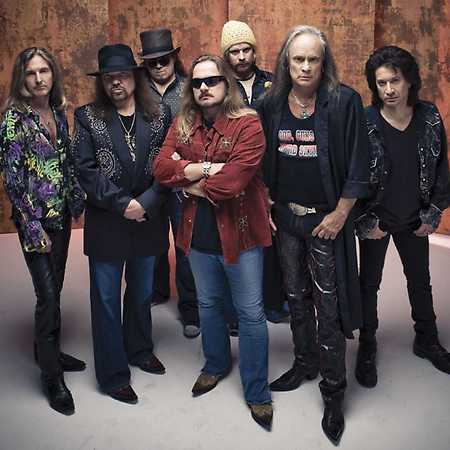 Lynyrd Skynyrd is an American rock band formed in Jacksonville, Florida, in 1964 by Ronnie Van Zant (vocals), Gary Rossington (guitar), Allen Collins (guitar), Larry Junstrom (bass guitar) and Bob Burns (drums). It is best known for popularizing the Southern rock genre during the 1970s. Originally called My Backyard, the band was also known by names such as The Noble Five and One Percent, before finally deciding on “Lynyrd Skynyrd” in 1969. The band gained worldwide recognition for its live performances and signature songs Sweet Home Alabama and Free Bird. Van Zant, along with guitarist Steve Gaines, and backup singer Cassie Gaines, were killed in an airplane crash on October 20, 1977, putting an abrupt end to the 1970s era of the band.

The band re-formed in 1987 for a reunion tour with Ronnie’s brother, Johnny Van Zant, as its lead vocalist. Lynyrd Skynyrd continues to tour and record with co-founder Gary Rossington, Johnny Van Zant, and Rickey Medlocke, who first wrote and recorded with the band from 1971 to 1972 before his return in 1996. Artimus Pyle remains active in music, but no longer tours or records with the band. Michael Cartellone has recorded and toured with the band since 1999.

Lynyrd Skynyrd has sold 28 million records in the United States. They were inducted into the Rock and Roll Hall of Fame on March 13, 2006.