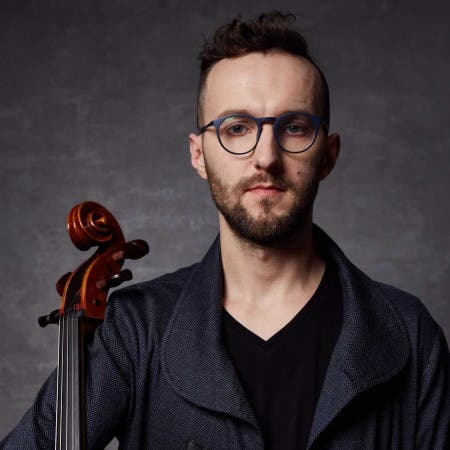 Krzysztof Lenczowski – born in 1986 in Kraków – is a graduate of the Fryderyk Chopin University of Music in Warsaw in the cello class of Prof. Tomasz Strahl and Rafał Kwiatkowski. From April 2008 to November 2009 he worked for the Polish Sinfonia Iuventus Orchestra, and from February 2009 to January 2015 he was a member of the Warsaw Cello Group Cellonet run by Professor Andrzej Bauer. He also plays the guitar, graduating from the H. Majewski Police Jazz Study in Warsaw with Professor Piotr Lemański. Since winning the Grand Prix of the XIII Bielska Jazz Smoke of the four nicest crowds with the power of destruction adequate to the band’s name (as Jan “Ptaszyn” Wróblewski described the band’s members), the band has been constantly hosting the biggest European music festivals, including Berliner Jazztage, JazzBaltica, Leipziger Jazztage, Festival Veranos de la Villa Madrid, Jazz Jamboree, Ethno Jazz Festival and Solidarity of Arts. The ensemble has also performed at the Berlin Philharmonic (together with Leszek Możdżer, Lars Danielsson, Zoharem Fresco), the National Philharmonic in Warsaw, the Szczecin Philharmonic (as an artist resident in the 2017/2018 season), as well as at the National Forum of Music and at the NOSPR headquarters on numerous occasions. In 2011, the album “Fade In” was released, which won the Fryderyk Award in the category “Jazz Phonographic Debut of the Year”. The next album, “Places”, was released in 2012 by Kayax and received Fryderyk in the category: “Album of the Year - Jazz Music”. Lenczowski cooperated with such artists as: "Lenczowski is the author of a book entitled Lenczów: Branfort Marsalis, Bobby McFerrin, Jason Moran, Gil Goldstein, Paolo Fresu, Wolfgang Haffner, Christian von Kaphengst, Rupert Stamm, Mathias Haus, Vladislav `Adzik Sendecki, Leszek Możdżer, Lars Danielsson, Zohar Fresco, Jerzy Maksymiuk, André Ochodlo, Urszula Dudziak, Anna Maria Jopek, Natalia Kukulska and many, many others.