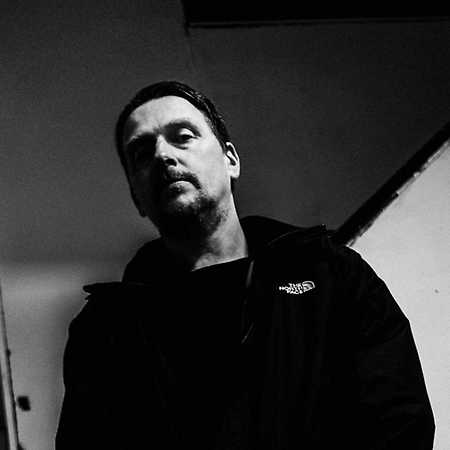 JK Flesh is the pseudonym employed by Justin K Broadrick for his work within heavy electronica and techno, informed by industrial, dub and power electronics. Justin initially used this pseudonym in the Techno Animal project with co-conspirator Kevin Martin.

Justin K. Broadrick’s output is an intimidating one. is earliest venture began, aged 15, with the recording of his first and last record with Napalm Death. Then he formed the pioneering industrial metal group Godflesh who have released a slew of seminal albums on Earache throughout the ’90s. In the meantime he met Kevin Martin and began experimenting with everything from dub and techno to hip-hop, breakbeat and rowdy ambience as Techno Animal. Together they produced four albums under the moniker.

In 1999 Broadrick founded Avalanche Recordings, which would serve as an outlet for some of his more expansive millennial work, namely as Final, Jesu and JK Flesh.

JK Flesh debuted properly in 2012 with the album Posthuman on 3BY3, but its lineage can be traced right back to Kevin Martin and the pair’s psychedelic industrial techno project, The Sidewinder.