Heresy is a strategy. At least for Hildegard von Binge Drinking. The nuns duo from Würzburg have played over 150 concerts since 2013, including shows in railway carriages, on a ship, at festivals from the merger to a Christopher Street Day to the Ruhrtriennale – and of course in clubs all over Germany. After a – now sold out – album and two EPs now comes the new record on the Frankfurt label Ichi Ichi: Infinity. Not an ordinary LP, but one in which all eight songs end in endless grooves. Rather an IP – infinite play.

It all came into being in April 2017: The duo, equipped with a scholarship from the Frankfurt LAB, had been locked up in a rehearsal room for a month in the Gallusviertel to start at zero and write, rehearse and record eight endless titles. To shorten a four-week long history with bursting gymnastics ball, annoyed kindergarten teacher and well-kept time pressure on four words: It worked perfectly.

The result is, thanks to the endless grooves, of course, a gimmick plate – but a good audible gimmick plate. Lover Pop, Leftfield Electronics, Zombiprog – whatever you want to call it, the Hildegard ingredients are all there: vocoder, (electronic) choirs, synthesizers, a bit of Krautrock - and the driving drums that keep it all together. Live still a revelation. 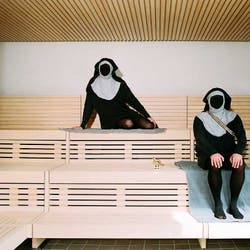 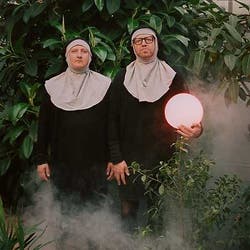