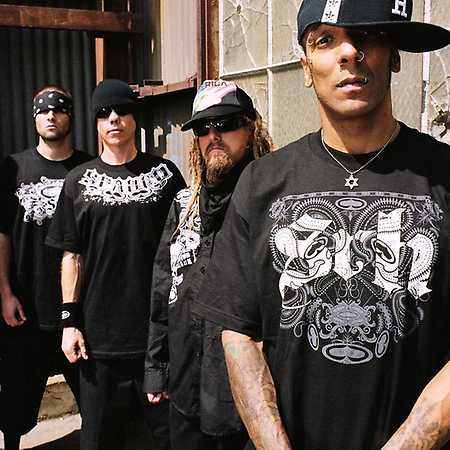 Hed PE (also known as (hed) Planet Earth and stylized as (həd) p.e.) is an American punk rock band from Huntington Beach, California. Formed in 1994, the band is known for its eclectic genre-crossing style, predominately in the fusion of gangsta rap and punk rock it has termed “G-punk”, but also for its reggae-fused music. The band’s cross-genre mix of styles has been cited by journalists as having a considerable impact on rap rock and nu metal, though no firsthand accounts of the band influencing bands in either genre exists and the band itself has denied being a part of these styles, identifying more as a punk rock band utilizing rap vocals in conjunction with other vocal styles (melodic reggae singing, screaming and death growls) rather than being a rap rock band in of itself. After releasing three albums on Jive Records, Hed PE left the label to record independently. Hed PE was signed with Suburban Noize Records from 2006 until 2010. Since 2014, the band has been signed with Pavement Music. Since 2006, the band has become known for its involvement in the 9/11 Truth movement, referencing it in many of their song lyrics and concerts, as well as the concept of the album New World Orphans, and more recently for their social liberal political activism. To date, Hed PE released ten studio albums, one live album and three compilation albums.