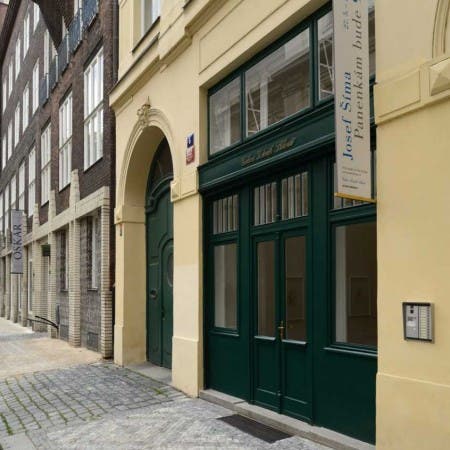 Galerie Zdeněk Sklenář belongs to the generation of institutions involved in establishing the contemporary art market that came into being after 1989 in what was then still Czechoslovakia. Building its reputation on its dynamic and dramatic presentation, the gallery brings together leading artists representing both traditional and contemporary. To date, Galerie Zdeněk Sklenář has organised more than 200 solo shows and many collective exhibitions in the Czech Republic, Europe, the USA, and China, for the most part acting in collaboration with renowned art institutions.

Publishing is a natural accompaniment to exhibition activities. To date, the gallery has produced more than 100 publications, all of which sensitively connect literature and philosophy with the visual arts in an international context. The gallery also produces films about art, and publishes albums of prints and other graphic works by artists from the Czech Republic and beyond.

Two public spaces for art and relaxation, both located in Mariánská Street in Litomyšl (CZ) and designed by the architect Josef Pleskot, came to life thanks to the initiative of Galerie Zdeněk Sklenář. The first was opened in 2012 – 1ar(t) includes Václav Cigler’s Spring and is the world’s second smallest private park open to the public. The second is 2ar(t) – a zen garden, measuring 164 square metres in area, which opened in 2017. Both spaces immediately became very popular.

Galerie Zdeněk Sklenář is a pioneer when it comes to relations with China. In 2005, it became the first Czech private gallery to organise an exhibition in Beijing in collaboration with the National Gallery of China (NAMOC). The exhibition František Kupka: Man and Earth represents a breakthrough on the basis of the fact that it significantly contributed to the transformation of relations between China and the Czech Republic in the spheres of art and culture. One of the most important activities carried out by Galerie Zdeněk Sklenář consists of the popularisation of Chinese art in the Czech Republic and vice versa, and the gallery has served as a role model for many other institutions and individuals in both countries.

The close relationship between the gallery’s founder, Zdeněk Sklenář, is rooted in his family background. He is the nephew and namesake of the famous Czech painter Zdeněk Sklenář (1910–1986), who was fascinated by China even as a child and s whose three-month stay in this Asian country had a profound influence on his life and his work.