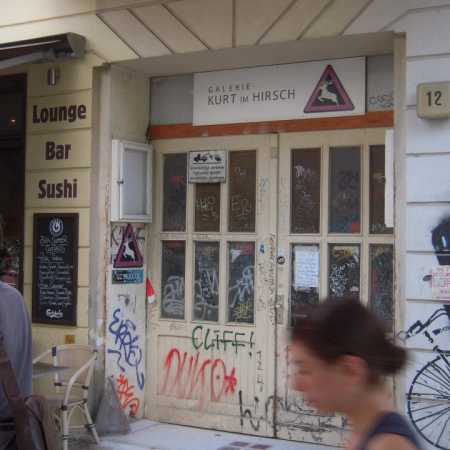 The gallery space is located inside the historical Hirschhöfe in Prenzlauer Berg. Being one of a few non-commercial art galleries in the area, Galerie Kurt im Hirsch forms an integral part of Berlin’s vibrant art scene. The gallery is run by a group of young artists and art historians, supporting new and daring forms of artistic expression.

Kurt im Hirsch’s programming consists of temporary exhibitions with young Berlin-based as well as international artists. There are several group but mostly solo shows. The gallery welcomes art in all media, but focuses on experimental as well as participational approaches.

Galerie Kurt Hirsch was founded 10 years after the fall of the Berlin Wall at Berlin Prenzlauer Berg. In 1999, a group of artists took over the one-room-apartment of a person called Kurt Deichsel (at least, that is what the nameplate said) at Oderberger Straße 12 and Galerie Kurt Deichsel was born. In spring 2002, the gallery moved to the ground floor apartment at Kastanienallee 12 where it is still situated today. There, the gallery changed its name to „Kurt im Hirsch“, inspired by the so-called Hirschhöfe, a former meeting spot of the East Berliners underground art scene.

In the years of its existence, the gallery has spun a wide network of people connected to the gallery. Since 2012, Kurt im Hirsch is a member of the „Netzwerk freier Projekträume Berlin“.