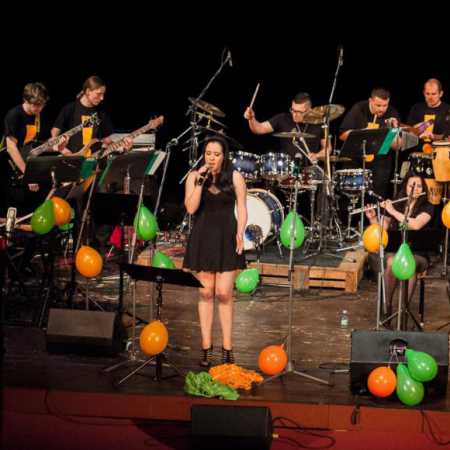 Factorial! Orchestra is a big band exholický, whose origins date back to the year 2009. For nearly 5 years of existence it has replaced a number of amateur young musicians from and around Holic but also a considerable amount of professional musicians. In repertoir of the familiar songs jazz, pop or rock ´ n ´ Chuck singers: Arethy Franklin, Carlos Santana, Chuck Berry, Robbie Williams, Michael Jackson. Bigbandové editing of the songs of the aforementioned artists, give a new dimension to familiar songs.

Factorial! Orchestra is a big band of the modern style of a Barber. His concept of trying to zoom in on the big bandovou music and younger listeners. The Centre of gravity is therefore the repertoir of music in the rhythm of the funky and Latin American songs, but you can hear the speeches and rock n roll ´ ´ or jazz.

During its existence he toured on a number of our urban Festival in the East region, various music and theatre festivals and in Pardubice, královehradeckých or chrudimských music clubs. For the project can be considered as very successful and educational concerts for schools, which were also among the students in 1911. During the winter we play and non-traditional jazz arrangements of carols. An unusual concert is therefore not Factorial! Orchestra in the Church. So far the outermost destinations, where it was possible to hear the Factorial! The Orchestra was the Polish city of Strelcze Opolskie. Big band is composed of the amaterskych players in the range of 20-35 years. The artistic director is Zdeněk Borecky.

Why the name Factorial? This name was invented by the pianist Factorial! Orchestra Jarda Mlejnek-a graduate of the Faculty of mathematics and physics. Using the concept of factorial can be expressed a mix of all of the musicians, a mix of all genres, or a count of all the songs that you can when to fold. – Translated by Automatic service