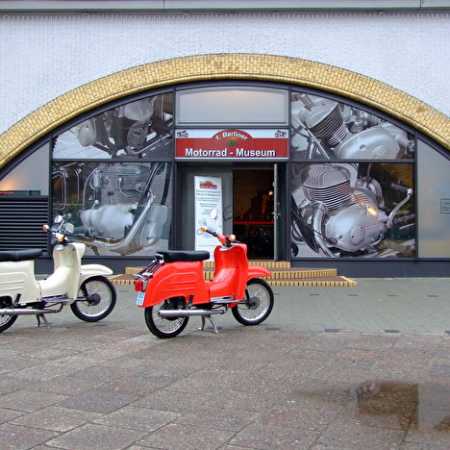 Erster Berliner DDR-Motorradmuseum is a museum for two-wheelers from the German Democratic Republic and is located in Berlin under the arches of the S-train tracks at Alexanderplatz.

It was opened in 2008 and shows over 140 motorcycles, scooters and mopeds from the companies MZ, Simson, IWL and EMW on ca. 1000 square meters. Thereby, almost the complete palette of two-wheelers production in the GDR is covered. But besides the basic models also combinations, sports and racing vehicles as well as special purpose and official motorcycles are shown at the museum.

The collection is completed with documentations about the motorcycle production venues in the GDR, infographics, films and videos, postcards, books, posters and photos from the time of the shown motorcycles.

The museum is situated in a former market hall with granite stoned and floor tiles by the company Villeroy & Boch from around 1897.