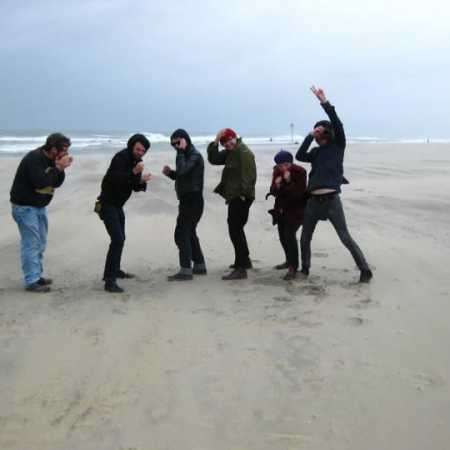 Datashock are variously described as “postpsychedelie”, “team”, “neohippie post krautrocková improvisation”, “psychedelic experiment”, “freefolková reincarnation of Amon Düül”, etc. Started at a time when music publicists discovered a new continent known as New Weird America, and in his work mixes the current electronics with ethnic, desert, nomadic and simplistic people characters, whose “Middle Eastern” connotations acquire new meaning today. Similarly as in the case of groups of No Neck Blues Band or Sunburned Hand of the Man is their creation of a collective mark or even the community. Performances are improvised and personnel composition is variable. On its label are charakterizováni as Meudiademorte “young punks who pretend that they are the old hippies” – and this despite the fact that they move on the scene eleven years and have a number of recordings and collaboration. Their current creative position suggests accompanying text to this album Keine Oase in Sicht: “the Sun can ruthlessly glow over the late capitalism, oslepovat us and pass, but this horde of Saar continues his pilgrimage and doing their thing.” – Translated by Automatic service

Eighteen Nightmares At The Lux