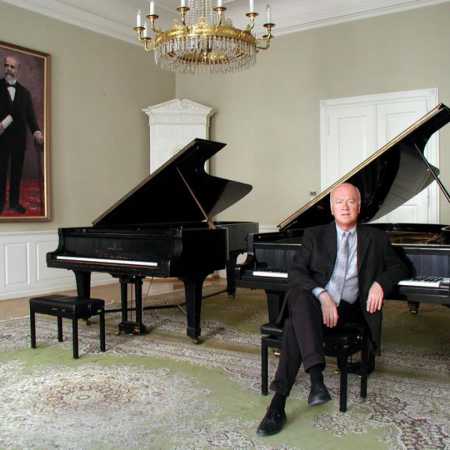 He was born in Kroměříž and also studied at the Conservatory of music. At the Academy he graduated with Prof. František Maxiána. He graduated from the studies Prof. Ivan Moravec. In 1975, won honorable mention in the Queen Elizabeth competition in Brussels, and a year later won the contest in the Italian Senegálii. Is the holder of the Grand Prix du Disque in 1982 for the recording of the French piano concertos. Since 1992, teaches at the Prague Academy of performing arts.

Boris Krajný is among our leading pianist. He worked as a soloist of the Prague Chamber Orchestra and the Czech Philharmonic Orchestra. He gave concerts in the context of festivals in Besancon, Athens, Baalbek, Bergen, Ljubljana and Harogate. In addition he has toured in the Carnegie Hall, the Kennedy Center and the National Gallery in Washington, in London’s Wigmor Hall, in the Tchaikovsky Hall in Moscow, Berlin, Munich, Salzburg, Paris, Salzburg, Brussels, Sydney, Melbourne, Buenos Aires, Havana, Egypt, Mexico, the a.t.d in Vienna.

Premiered at the Prague Spring Festival in 1990 to 2. Symphony of Leonard Bernstein (The Age of Anxiety), in the season of 1999-2000 was 4. Piano Concerto in b. Martinů (Harpsichord) in New York and in Kuala Lumpur, at the Festival in the French made the Ruanne complete piano and Chamber works of l. Janacek.

Krajný is able to make the most of the excellent sound and technical possibilities of the instrument. His playing the piano has cultivated the gentle sound that stands out especially in the interpretation of the impressionistic and romantic repertoire. – Translated by Automatic service