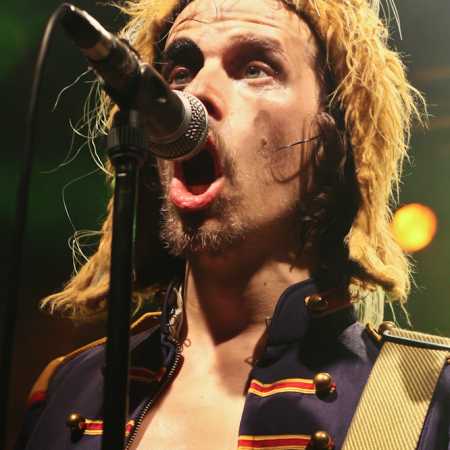 Bonaparte is the stage name of Swiss songwriter and producer Tobias Jundt. Bonaparte was founded after a month-long road trip in 2006 in Barcelona, and its music is often referred to as “visual trash punk”. Jundt brings together a multitude of changing performers and musicians for live shows. Since 2006 Bonaparte played over 500 concerts among others in Europe, China, Russia, New Zealand or the USA.

The sound of Bonaparte is characterized by simple, punk related harmonies. The recognizable aspect about Bonaparte is the very rough and rustic sound. It partly sounds like primitive recording techniques (“living room acoustics”, also called low fidelity or lo-fi), which is probably intentional. At the same time, the sound of Bonaparte (especially on the second record) is strongly influenced by digital music, which makes creates a complex sound in its musical combination.

Sometimes Jundt performs on his own, but mostly in a larger cast, which is also constantly changing. The circle of Bonaparte includes an indefinite number of artists. As in the song lyrics, Bonaparte is also concerned about expanding limits through the stage performance. Stripping people in animal costume make the concert a grotesque show whose eroticism sometimes fascinates, sometimes deters. Even animals, in the form of disguised actors, appear again and again in the shows. Meanwhile, Bonaparte has released five studio albums.