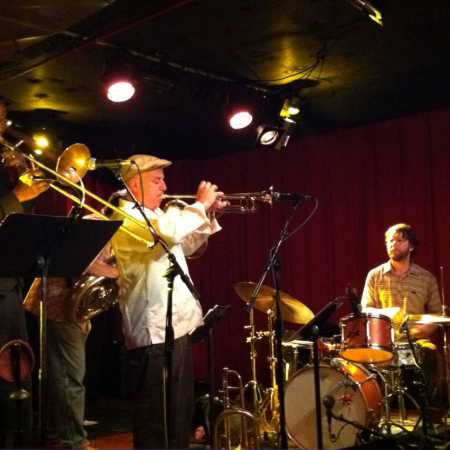 World veteran drummer Billy Martin, who is the last twenty years the backbone of the trio Medeski Martin Wood & and in the past has gone through a number of projects on the border of Seoul and jazz rock. He played with Sting and Arethou Franklin and Medeski Martin Wood works with the next &, muzikantsky as well as an exceptional project, at the opposite end of the spectrum. No electricity, keyboards or guitars, but the winds as the jazz cut out of the party in New Orleans. Media indicate a Wicked Knee “freaky avant brass band”, Martin argues that it is “an antidote” to MM&W. The axis of the brass section is the trumpeter Steven Bernstein, a four-time winner of the Downbeat magazine poll, bandleader and Territory reports Sexmob Millennial Orchestra, which was the music supervizorem film I’m Your Man about Leonard Cohen. Steven is a member of the Bernetein take John Lurie’s Lounge Lizards, and author of albums Diaspora Soul, Diaspora, Diaspora Blues Suite and Hollywood Diaspora that delivered on the Tzadik label. He has collaborated with many other musicians, which include Marc Ribot, Lou Reed, Paul Shapiro.

The Repertoire of the Wicked Knee form next to the original songs and carefully selected links to the music of Africa or the jazz classics-including a cover of Sugarfoot Stomp from the jazz pioneer, King Oliver, or Am I Blue hit from Ike & Tiny Country.

“The name of the Wicked Knee I borrowed from the CD compilation aimed at the African-American roots shifted to a slightly surreal plane,” says Billy Martin – Translated by Automatic service

Mostly Other People Do The Killing