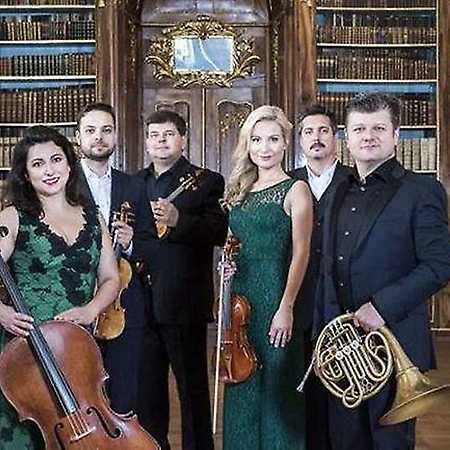 File Baborák Ensemble was founded in 2001. The artistic director is the conductor of the French Horn and Radek Baborák. Its members are soloists of the young generation-Chamber players of leading Czech orchestras and file. The file is a combination of musicians from Bohemia and of the orchestras, where he Baborák (United and Munich Philharmonic Orchestra, the Berlin Filharmonie), other friends and other musicians from the String Quartet (Wihan, Epoque etc.) files, such as the Czech Nonet, the Berliner philharmonische Solisten, and various other artists, mostly winners of international competitions. The file includes the complete repertoire of the programmes and projects of the Baroque and classicism, romanticism and a lot of little songs. of the century. Baborák Ensemble perform at festivals Mitte Europa, Concentus Moraviae and Prague Spring. He completed a tour in Germany, Japan, and after the Czech Republic.

French Horn Radek Baborák is among the most prominent personalities of the international music scene. He regularly performs with a number of the world’s leading orchestras. Is a guest of prestigious festivals and concerts are carried, and radio and television stations filmed the extensive discography includes the prized recordings realized in the leading publishers of classical music (EMI, Sony, Exton, Cryston, Suprafon, ArteNova). It is a founding member of many chamber ensembles (Afflatus Quintet, Baborák Ensemble, the Czech hornový, the choir, sinfonietta). His repertoire includes virtually the entire work for Horn, from baroque to contemporary concerts song dedicated to him. Sólohornistou the Berlin Philharmonic was in seasons 2003-2010. As a soloist he ascended with them e.g. at the Salzburg Easter Festival with Sir Simon Rattle and Ian Bostrigem, in Prague’s estates theatre with Daniel Babrenboimem, in the Hall of the Berlin Philharmonic or Konzert Renholda Gliera orchestrated by Dimitrij Kitajenka.

It is still a member of the Berlin octet and sólisticky performs with the Berlin Barock Solisten. Radek Baborák was born in Pardubice in the family with a long tradition of the musician. In eight years, started playing French Horn in the class of Prof. Karel Křenka, and under his leadership became the winner of the national competition and in twelve years, the overall winner of Concertino Praga. Three years later, he won 3. Prize at the Prague Spring competition and became the laureate of Grand Prix.

From 1990-1994, continued his studies at the Prague Conservatory with Prof. Bedřich Tylšara. During his studies he won in international competitions in Geneva-1993, in Markneukirchen-1994, ARD in Munich-1994. He received a Grammy Award in 1995, and the price of Classic Davidow. In parallel with the track of the soloist was a founding member of the Prague Philharmonia. In the eighteen years he was offered a place in the first hornisty in the Czech Philharmonic Orchestra (exceptionally without bankruptcy), where he remained for two years. From 1996-2000 he served as sólohornista of the Munich Philharmonic. In 2001 closed the annual exclusive contract with the Bamberských Symphony Orchestra. His work in orchestras, has concluded in the Berlin Philharmonic in seasons 2003-2010. Entirely separate chapter consists of activities in the field of Chamber music. Radek Baborák is a member of the Afflatus Quintet, which won first prize at the ARD competition in Munich. In 2001 he founded Baborák Ensemble, whose base is a cast of the Horn and String Quartet, Czech hornový choir, 300 years long tradition of Horn within Bohemia. As the duo played with pianist Yoko Kikuchi, harfistkou Jana Boušková Aleš Bárta and others. A member of the Berliner Philharmonisches Oktett is, which is the oldest file in the history of the Berlin Philharmonic. Berliner Barock Solisten collaborates with and other exceptional musicians which include Yefim Bronfmann, Andreas Schiff, Ian Bostrige, Emmanuel Pahud, Albrech Mayer, Wenzel Fuchs, Lorenz Nasturica, Daishin Kashimoto, Guy Braunstein. Radek Baborák, he worked as associate professor at the Arturo Toscanini conducting in Bologna, profesorsky hosted on the University of Tokyo, Escuela Superior de Musica Reina Sophia, Madrid. Currently he teaches at the ACADEMY of PERFORMING ARTS in Prague. Initiated in the year 2010 the Orchestra Sinfonietta, whose Czech is the artistic director and conductor. Its members are the most prominent Czech musicians of the younger generation.