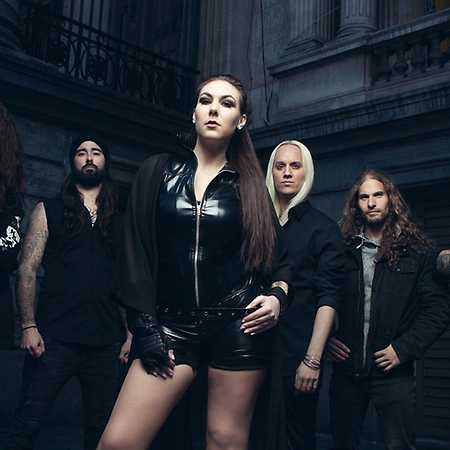 Amaranthe is a Swedish/Danish band, originated from Gothenburg, Sweden, formed in 2008. The band fuses melodic metal with pop melodies. Formed by Jake E (Dreamland, Dream Evil) and Olof Mörck (Dragonland, Nightrage), the project began taking shape, when singers Elize Ryd (toured with Kamelot) and Andreas Solvestrom (Cipher System, Within Y), signed on, as did drummer Morten Løwe Sørensen (The Cleansing, Koldborn, Mercenary). Bassist Johan Andreassen (Engel) joined after the photoshoot for the Leave Everything Behind demo but before the recording of the first album Amaranthe. In May 2009, the band was forced to change their name from Avalanche due to legal issues. They later released their first demo (including 4 songs) on their MySpace page, titled Leave Everything Behind. The band’s debut album, Amaranthe, charted in Sweden and Finland. The album features a combination of modern metalcore-style breakdowns, harsh screams and heavy guitar riffs with soaring clean vocals and synths reminiscent of power metal. The musical style of Amaranthe has been described as “a healthy dose of pop fused with a heavily metalcore-inspired melodic death metal sound".