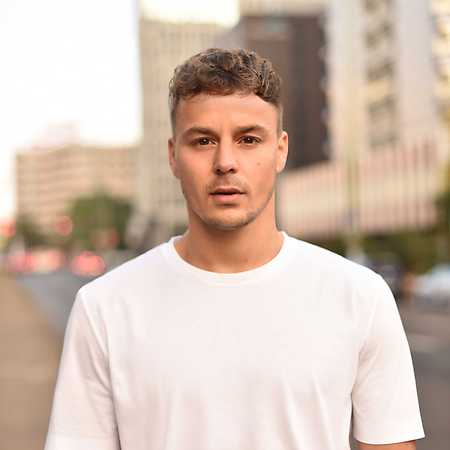 Alexander Knappe has already been through a lot in his life. With 13 years footballer in the youth at Energie Cottbus until talent scouts bring him to Berlin to Hertha BSC. But at age 18, the dream bursts, diagnosis: cruciate ligament rupture. The contract is dissolved and a world collapses. The school grades suffer, the high school graduation is messed up. 2010 reset, new beginning. With his debut album Zweimal bis unendlich he immediately succeeds in jumping into the charts and his second album Die Zweite finally establishes the expressive singer in the league of German pop poets. Together with a philharmonic orchestra, Alexander 2015 reinterprets his songs, starts a series of concerts and accepts the live album Musik an. Welt aus. Guests included artists such as Johannes Oerding, Alexa Feser and Fury in the Slaughterhouse. After these unforgettable concerts, Alexander takes his time, because his credo is: “Never write a song for no reason!”. Every note, every word, wants to be felt and lived.

In his new album Ohne Chaos keine Lieder, Alexander translates personal breaks into songs, throwing an ironic, autobiographical light on himself and his way of turning life into music. For the upcoming tour fans can not only look forward to the unparalleled, rousing energy of the exceptional singer, but can also look forward to touching ballads like Du or Heimweg that tell of the life that you have to endure without cutting off the tips.