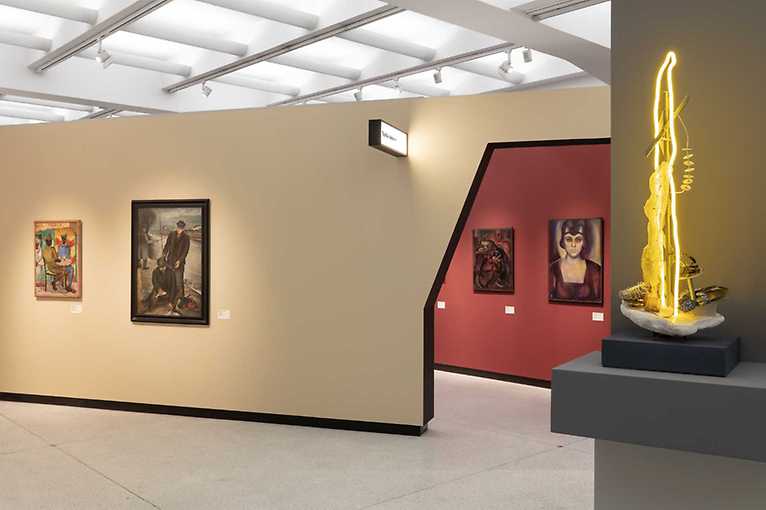 The permanent exhibition is installed on the third floor of the Trade Fair Palace on the occasion of the hundredth anniversary of the founding of Czechoslovakia. Based on the collections of the National Gallery Prague, complemented with loans from institutions and private collections, the exhibition introduces the rich and cosmopolitan art scene in the young independent Czechoslovakia between 1918 and 1938.

The exhibition is interdisciplinary, presenting not only visual artworks but also other cultural forms that flourished during the first republic, such as book illustrations, design, graphic design, etc. Using art topography, it shows the diversity of the art production and the lively cultural scene of the period.

The exhibition presents the art of the first republic through the eyes of a 1920s and 1930s art goer and introduces prominent galleries, art clubs and institutions, as well as the important cultural centres of the young state. It primarily concentrates on Prague as an art centre with lively exhibition activity that focused not only on local artists but also on the most progressive names from all around Europe. However, the exhibition also addresses other centres such as Brno, Zlín, Bratislava, Košice and Uzhgorod. The curators partly reconstruct important exhibitions that were held in these centres during the first republic period (the exhibition of the Tvrdošíjní group, the Exhibition of Contemporary Culture in Brno, Poesie 32, the First Exhibition of Surrealists in Czechoslovakia).

The exhibition introduces important cultural events of the period and emphasizes the first republic’s cosmopolitan and multinational character. This approach aims not only to show with historical accuracy how wealthy and diverse the culture of the young state was but also offer inspiration for the present where the lack of historical knowledge often results in xenophobic attitudes. The permanent exhibition is accompanied by an extensive educational program.