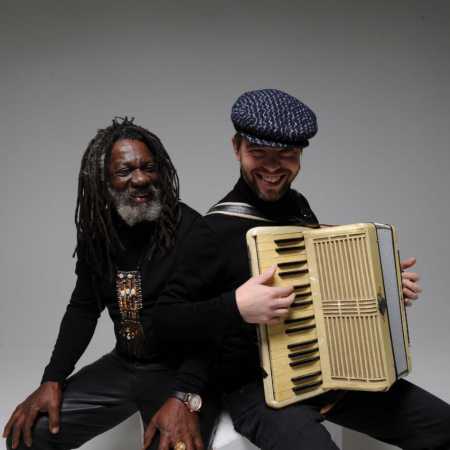 Jamaican reggae veteran dances with a beatboxer Fixie gangsta soul and sinful Parisian musette. The charismatic singer from Jamaica nicknamed Electric Dread the accordionist François-Xavier Bossard aka Fixie recently wrote another chapter in its successful cooperation: the album A New Day breaks sales records in France and their wonderful performances at the fair Womex remembered just about everyone.

Šestapadesátiletý Winston visually does not have: his dreadlocks hanging in half while walking back and swings so obvious thing to reggae. But no: the Fixie (also played keyboards) and beatboxer Marc Ruchmannem encouraged to dance a unique mixture of French musette style, soul, Jamaican calypso, Afrobeat and Maloya songs from the island of Réunion, in which reggae only perceive as an attitude. Winston’s songs come through accordion mischievous touch, only from his stunning soulful voice oozes sometimes rebellious anger: so if you want to remember him only as “typesetter Love” hit the beautiful Garden of Love, it’s time for a correction. Otherwise the album A New Day drums and Tony Allen contributed as members of well-known groups Colours LINDIG.

Cosmopolitan Winston McAnuff did not fall from the sky: the Catholic son of a preacher is trained in gospel music choir. From the 70th years belonged to the reggae stars: filmed with Inner Circle, Earl Sixteen and Derrick Harriott. He lived in New York, London, but then a nice long lost to compile due to old albums by French label Makasound returned to the scene with Mad Professor and Horace Andy. Finally, with “quite another reggae”, settled in Paris.

“I love you,” she threw herself into his arms Vanessa Paradise when she heard the album Rockin Paris. Winston him in 2006 he recorded with members of the French group Java, to which also belonged Fixi. Name java refers to the popular dance-based waltz, hit the pre-war Parisian dance halls for its sexual overtones in high society odmítanému. From the streets of Paris came and style bal-musette, unbound café music with the central instrument accordion, affecting future career Edith Piaf and Django Reinhardt. At the end of the 60th years, interest in the musette had subsided, the group as Java but typically French music again resurface. And now joined by Winston McAnuff with a fixie. – Translated by Automatic service