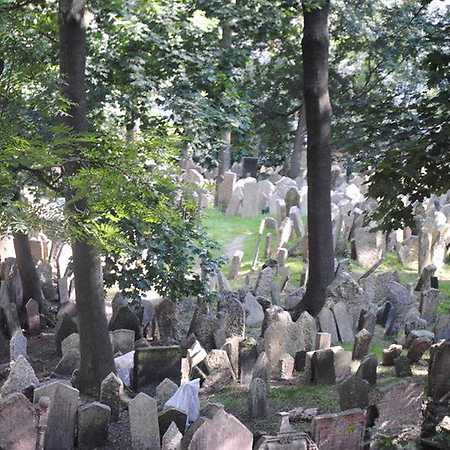 The Old Jewish Cemetery was established in the first half of the 15th century. Along with the Old-New Synagogue, it is one of the most important hictoric sites in Prague´s Jewish Town. The oldest tombstone, which marks the grave of the poet and scholar Avigdor Karo, dates from the year 1439. Burials took place in the cemetery until 1787. Today it contains some 12,000 tombstones, al though the number of persons buried here is much greater. The cemetery was enlarged a number of times in the past. In spite of this the area did not suffice and earth was brought in to add further layers. It is assumed that the cemetery contains several burial layers placed on top of each other. The picturesque goups of tombstones from various periods emerged through the raising of older stones to the upper layers.

The most prominent person buried in the Old Jewish Cemetery is without a doubt the great religious scholar and teacher Judah Loew ben Bezalel, known as Rabbi Loew (d. 1609), who is associated with the legend of the Golem. Among the many other prominent persons buried in the Old Jewish Cemetery are: the Mayor of the Jewish Town Mordechai Maisel (d. 1601), the Renaissance scholar, historian, mathematician and astronomer David Gans (d. 1613), scholar and historian Joseph Solomon Delmedigo (d. 1655), and rabbi and collector of Hebrew manuscripts and printed books David Oppenheim(d. 1736).