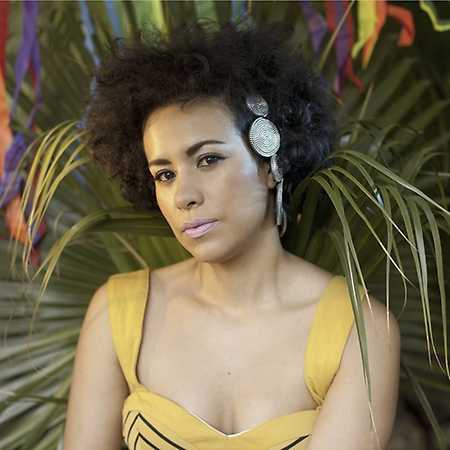 Mane on his head, wearing colorful dress and body snake that wraps around the legs of dancers and almost immediately bites. Then allegedly failing to dance and do not stop desperate people begging for deliverance. At least that’s the legend about traditional Chamamé of Misiones province in northeast Argentina, the birthplace of the Mariana Yegros.

In cosmopolitan Buenos Aires with producer and also the husband Gaby Kerpel aka King Coya mixture Argentine cumbia, Chamamé, reggae dancehall and hip hop sheet of dynamite and set off: a debut album Vien De Mi then last year it worked like a drug. “I admire all the people violating the rules, because even I do them in my music do not drive,” says Mariana, a big fan of Björk.

Although it would seem that her odkoukala dependence on bizarre costumes, not so. After graduating from the Conservatory became a member of the famous Argentine File De La Guarda – The combination of circus, music, dance and theater. From there, you brought a sense of stage show full of movement, light and colorful costumes.

Gaby Kerpel composed of De La Guarda music: Argentine and Brazilian styles kicked electronics and hip hop. He has collaborated with Howie B, Carnabailito album he produced Gustavo Santaolalla (Bajafondo Tango Club) and in the role of DJ and his wife traveled the world in the project Zizek Club, of which there emerged a major Argentine ZZK Records label focused on electro cumbia. Today, the largest catalog of ornaments include La Yegros.

The underground scene in Buenos Aires, Mariana had already gained a good reputation alongside the Dutch electronics Dick El demasiado, but only with Gaby Kerpel, accordion player Alejandro FRÁŇOVÁ (summer filming with Juana Molina) and composer Daniel Martin, she became the first lady of Argentina electro cumbia and Chamamé. – Translated by Automatic service