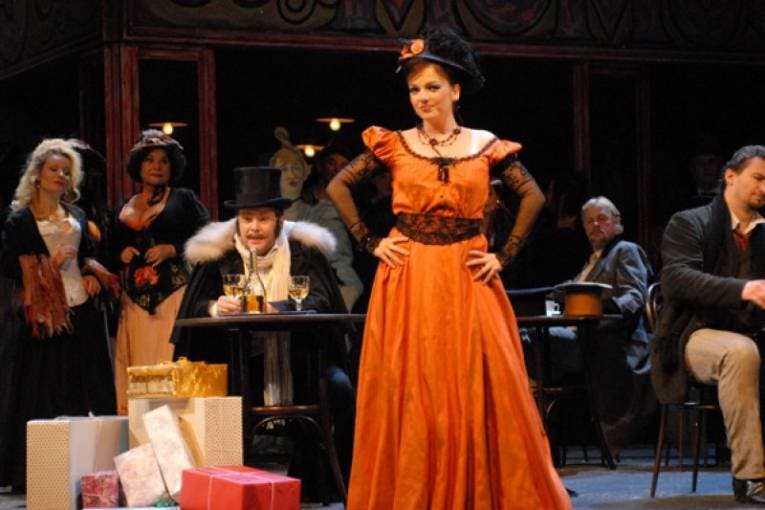 The final decade of the 19th century witnessed the emergence of new themes in the world of Italian opera, inspired by the realistic literary production of the period. Having shed the limitations of Romantic idealization, Emile Zola’s naturalistic writing aspired to portraying the world with all its dark sides and suffering, an approach which had its parallel in opera in Verismo, a movement characterized by emphasis on subjects dominated by passions, and plots climaxing more often than not with violent, tragic endings. Ranking among the most brilliant manifestations of Verismo are Giacomo Puccini’s Manon Lescaut, La bohème, Tosca, and Madama Butterfly. The book by Paris artist and author Henry Murger, Scènes de la vie de bohème, first published in 1851, was exceptionally successful, and Puccini became immediately aware of its immense dramatic potential.

The moving story of love between the poet, Rodolfo, and Mimi, a tender young woman too delicate to be able to enjoy a long life, combined with a story of friendship of four young artists at Montmartre, was indeed an ideal theme for an opera. The libretto was supplied by the tandem of leading Verismo opera writers, Luigi Illica and Giuseppe Giacosa, with whom the composer had first collaborated on Manon Lescaut, and whose services he was yet to seek, after La bohème, also for Tosca and Madama Butterfly. La bohème was premiered at Turin’s Teatro Regio, on February 1, 1896, with Arturo Toscanini conducting. The work’s seeming lightness, standing in stark contrast to the then still dominant Wagnerian style, at first confused the audience and critics alike, and the first night passed to cool reception. Two months later, however, its presentation at Palermo was already a triumph. In this opera – in the same way as subsequently in Madama Butterfly or Turandot – Puccini gave proof of his mastery at capturing local colour in music; Debussy reportedly said he didn’t know of anyone who would have achieved a more fitting musical portrayal of Paris in those days than did Puccini.