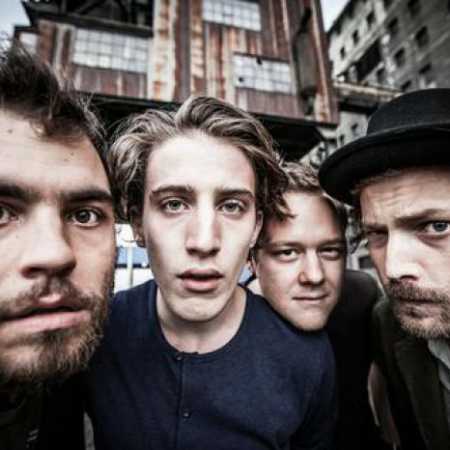 At first glance the word „Kompost“ doesn’t conjure up the thought of a protean, fire-eating entity equally capable of rocking you to sleep or rocketing you into orbit . . . but wait a moment, let’s start on the surface. Organic, earthy, alive; a jumble of countless bits and smears from the king’s table and straight out the gutter, melted together into a single mass. A little funky. Sometimes a LOT funky. Kompost is all those things.

But look deeper, that’s where the action is. The closer you get to the center the more it heats up. Reactions are taking place, unknown quantities brewing. Musical ideas are broken down to their constituent atoms then fused together again in seemingly random combinations – but there’s method to this madness; the creatures emerging from this primordial ooze are walking, talking, preaching.

In concrete terms: this is a band the way bands are supposed to be. They’ve got it all: fire, sweetness, the ability to step on the one so hard that you nearly fall over, a seemingly inexhaustible flow of ideas and the best thing of all: real telepathy, the kind you hear about. Those impossible, jaw dropping, roller-coaster twists, turns and stops only work because each of these four heads knows what the others are going to do next. Don’t be fooled: this band is a monster. They’ll pull you in; don’t bother trying to resist. They’ll make you a part of themselves and won’t let go until THEY feel like it . . . but by then you won’t want to leave.

Kompost 3 will present their third album Epigenesis. Trumpet, e-piano, drums, bass, and subtle electronics provide the sonic groundwork for this young and funky instrumental jazz band. Despite their young age, the members of Kompost 3, Martin Eberle, Benny Omerzell, Lukas König, and Manu Mayr, have already played with a wide variety of renowned artists and ensembles, including Soap&Skin, Wolfgang Mitterer, Wolfgang Puschnig and the Klangforum Wien.

Founded in 2009, the band calls Vienna’s third district its home, a residential area for workers

interspersed with masterpieces of aristocratic architecture. The days of 18th century imperialism

are long gone, and the dreary reality of working life has settled into the third district. Detecting 21st century signs of muck and rot, the band takes its energy from this wholly Viennese air of decay to create music that is fresh and invigorating, much like a compost pile produces fertilizer – hence the name, Kompost 3.