Batten cannot be defined by a single music genre; rather, she effortlessly crosses the lines between rock, metal, fusion and funk. She has played in many bands and had a long-term collaboration with Michael Jackson who had chosen her from among one hundred guitarists to play on his Bad tour. She would later play with Jackson on his Dangerous (1993) and HIStory (1997) world tours. In addition to Jackson’s band, she also played with guitarist Jeff Back, with whom she had several legendary improvs at concerts and recorded 2 albums. So far, Batten has recorded 5 solo albums and she’s also been involved in teaching the electric guitar, having published a number of books on the subject. Her workshops are known for their excellent quality. She mostly performs solo and her one-woman shows are heavy on multimedia. There is a projection screen on the stage and every composition is accompanied with a short video. Batten uses backing tracks at her concerts. She is an expert user of guitar gadgetry, so her concerts have an amazing sound. Occasionally, she works with other musicians such as Uli Jon Roth of Scorpions just recently. 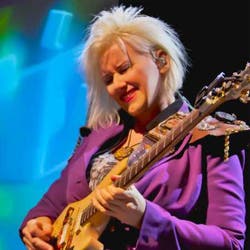 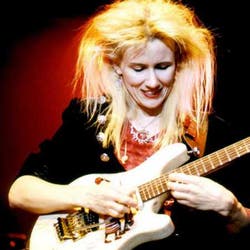