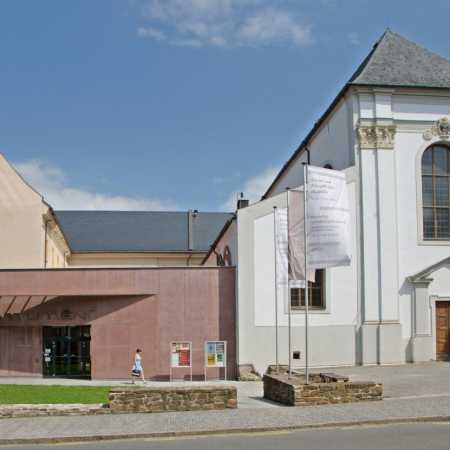 House of art is among the most important cultural institutions in Opava. His emergence is related to saving the dilapidated building of the former Dominican monastery, which was even issued demolition bill. Thanks to the socio-political release in the late 1960s. years, it managed to save and to a substantial part, placed the City Gallery. In 1974, the reconstructed house of art was inaugurated and was followed by the opening of other space-art schools and at A wine bar. The reconstruction is carried out according to the architectural project of Ing. Arch. Leopold Swimmers, whose influence on the rescue of the former convent was essential. Architect Swimmer used in Opava, at that time a courageous way of viewing the raw concrete in combination with the big screen in aluminium-framed glass separating the cloister from the restored garden of Eden. The newly built entrance into the entire building was raised in the spirit of modernism with the proportions and scale calculated and composed sensitively. On the other hand, was in the area of the former convent of the applied approach characteristic of his effort to “beautify” even at the cost of loss of authenticity, strength, simplicity and functionality. Skladištním the Windows of the former Church has been returned their baroque appearance of the Interior of the House, the arts and wine had to be artistically promoted marble floors, forged bars and railings from Alfred Habermann and original lighting of cast glass by František Víznera. The art house was the pride of the Socialist culture, its church, which wanted to demonstrate its power, then adds, and the care of monuments and art. House of arts activity on the whole political atmosphere was owed 70. and 80. years, but some exhibition events shaped the history and memory of the visitors. – Translated by Automatic service