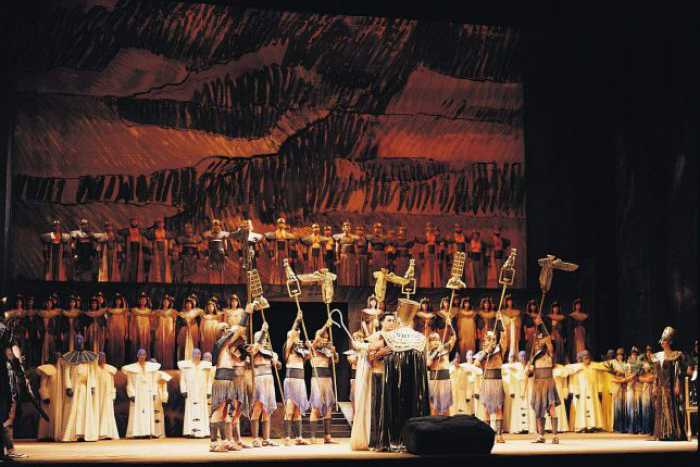 To inaugurate the Suez Canal, Ismail Pasha, Viceroy of Egypt, commissioned an opera from the composer whose Rigoletto opened the Khedivial Opera House in Cairo in 1869. Giuseppe Verdi dedicated great care to preparing the new work and even visited Egypt so as to have his own idea of the country. (He even had Old Egypt “Aida trumpets” made in Milan.) Yet he only completed the opera after the Suez Canal was opened (17 November 1869) and the premiere took place on 24 December 1871 at the Teatro del’Opera in Cairo.

The dramatic charge of the story of the Egyptian Princess Aida and the warrior Radames grows out of the inner torment of a woman who has to decide between being loyal to her country or dedicating herself to a man who is one of the oppressors of her nation. The dilemma of choosing between love and duty is also faced by Radames, who ultimately betrays his homeland because of Aida. The current State Opera production was premiered in 1994. The renowned Egyptian painter Hafíz Abdel Farghali gave a genuine Egyptian colour to the sets which, together with Josef Jelínek’s exquisite costumes, contributed to the great success of the performances. The production also met with a tremendous response during the State Opera Prague’s two tours of Japan – in 2001, the role of Radames was portrayed by the world-famous artist José Cura, and in 2005 the celebrated singer Maria Guleghina performed with our company.