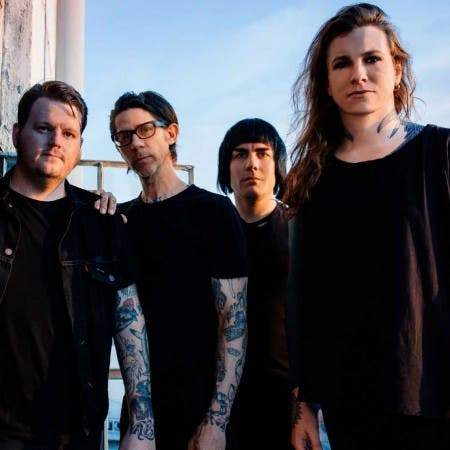 Against Me!  Haunting, Haunted, Haunts

Against Me! is a band that laughs danger and exceeds all the rules.

The microphone is Laura Jane Grace and their latest album Transgender Dysphoria Blues was released in January 2014. The title of their sixth plate offers decisive nod report that shocked fans and shook the rock world – Grace is being transgender. The man became a woman. The original name of Tom Gabel – Laura introduced herself as a woman in May 2012. The album Transgender Dysphoria Blues Grace is the first woman in the history of the band, but significant changes in the traditional sound of the band do not wait. History Against Me! started anarchist solo performances in Gainesville, Florida in 1997. Eventually he became a four-member band and later recruited another guitarist James Bowman and became a major band in the punk scene. In their energetic music can be heard folk and even wood country, and their first three indie albums – the first of 2002, Against Me! is Reinventing Axl Rose, the second from 2003 As The Eternal Cowboy and the third from 2005 Searching For A Former Clarity band has gained legions of devoted fans. In 2007 issued by major label album New Wave, produced by Butch Vig (Nirvana, Garbage, Green Day). SPIN Magazine called it “Album of the Year” and the band opened for a year later Foo Fighters.

After the release of the next album White Crosses, the band breaks up with label Sire. At that time, Grace decides to carry out and report its transformation into a woman. The Transgender Dysphoria Blues are ten songs – they are about fear and anxiety, but also a battle of defiance. Their powerful album earned rave reviews. S and Grace Bowman on the album appeared completely new musicians. The bass guitar played by Fat Mike of NOFX (is the owner of Motor Studios) in tracks “FUCKMYLIFE666” and “Unconditional Love,” while Laura Jane played in eight of the remaining tracks. Standing bassist of the band later became Inge Johannson (originally from the Swedish International Noise Conspiracy).

He plays drums Atom Willard, who once played with Rocket From the Crypt and later drummed with Offspring, Angels & Airwaves and Social Distortion. – Translated by Automatic service