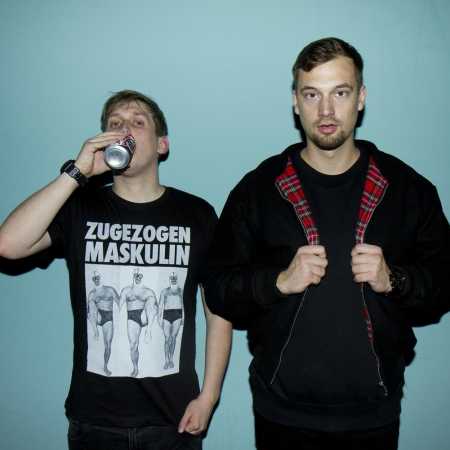 Zugezogen Maskulin are a German rap duo, formed by grim104 and Testo in Berlin in 2010. They are signed to the Hamburg label Buback. Zugezogen means ‘newcomers’ and the name is a reference to the fact that both members of the group are newcomers to Berlin, as well as an allusion to previous German rap duos ‘Westberlin Maskulin’ and ‘Südberlin Maskulin’.

In 2011 the free album Kauft nicht bei Zugezogenen (Do not buy from newcomers) was released. The duo presents themselves, like K.I.Z., as a mockery of gangster rap and machoism, where they exaggerate the stereotypes. In addition, there are many sarcastic and ironic texts. In the fall of 2013, the duo were signed by the leftwing/alternative Independent label Buback located in Hamburg. On there grim104’s self titled solo EP appeared in November 2013. In February 2015, the second album of the group followed, Alles brennt (Everything Burns). In October 2017, the third album named Alle gegen alle (All against all) was released.