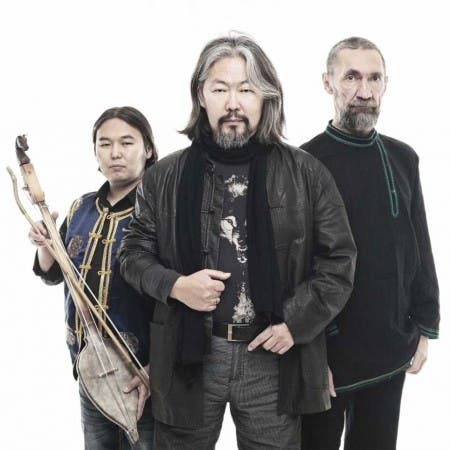 Yat-Kha was founded in Moscow in 1991, as a collaborative project between Kuvezin and Russian avant-garde, electronic composer Ivan Sokolovski. The project blended traditional Tuvan folk music with post-modern rhythms and electronic effects. Kuvezin and Sokolovsky toured and played festivals, and eventually took the name “Yat-Kha,” which refers to a type of small, Central Asian zither similar to the Mongolian yatga and the Chinese guzheng, which Kuvezin plays in addition to the guitar. In 1993, they released a self-titled album on the General Records label. After the release of Yat-Kha, Kuvezin and Sokolovsky parted creative ways and Kuvezin went on to release five other albums under the name Yat-Kha with other musicians (and less of an emphasis on electronics), beginning with Yenisei Punk in 1995, with morin khuur player Alexei Saaia (produced by Lu Edmots).