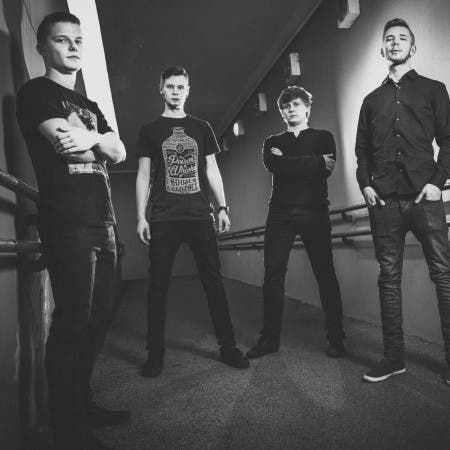 Waflad is a four piece band formed in 2011 in Wodzisław Śląski.Walfad (We Are Looking for a Drummer) was created in 2011 by Wojciech Ciuraj (vocal, guitar). Although 2nd September 2011 is considered the date of their official start, the core of the band had been active since April that year. Maksym Frączek (lead guitar) and Radosław Sitek (bass guitar) were the first members of We Are Looking For A Drummer. Then, those students of the 1st General Secondary School in Wodzisław Śląski and young musicians, they played covers of such groups as Cream, Jimi Hendrix Experience, Deep Purple. At that time the band’s name was also coined – a teasing manifest against unreliability of Kacper Kucharski (drums) who during the first months in the band never showed up for the rehearsals. But when he finally made it, he proved that he had been worth the wait. The oldest member, Daniel Rodzoń (keyboard instruments) – a man as talented as unpredictable – completed the composition of Walfad. The local community reacts enthusiastically to the band’s first songs, which are created in 2012 and recorded that year in No Fear Records studio in Rybnik. This material lets the band win a place in the final of the first edition of the festival Sophiscapes in Cracow, where the band shared the stage with Retrospective and Quidam. The following months are full of concerts, often in a quartet without keyboard instruments (among others as a support during the TUNE’s concert in Chorzów). In the summer of 2013 Maksym Frączek suddenly decides to leave Walfad.

In order to document the earliest, high school-related period of activity, the band decides to record an album. In the meantime Radosłąw Sitek, the bass guitarist, is replaced by experienced Maciej Kucharski (Kacper’s father). After three weeks of rehearsals and rising funds for the album almost until the last minute, Walfad starts working on “Ab Ovo” in LYNX MUSIC. A few months earlier the band came up with the idea for „śląski koncept album”. A story of a young Silesian man, composed of such songs as Kwiaty na Hałdzie, 2013 or Pociągi, made the fans of ambitious music aware of Walfad. Despite certain lacks, the band’s debut finds its buyers in, among others, Japan, USA and France. The reviewers unanimously agree that there is a great potential in the group. Maksym Frączek leaves the group right after the premiere of “AB Ovo”. His substitute also unexpectedly resigns and Walfad becomes a quartet. Wojtek becomes the only guitarist in the band. In such a composition, the group begins working on a new album. At the end of 2013 the band from Wodzisław gets to the final of the Syntezje festival where they present their music to Dawid Podsiadło. Spring of 2014 is marked with numerous successful concerts with Osada Vida, which allows the band to visit many different places in Poland for the first time. At that time the majority of material for the album “An Unsung hero, salty rains&Him” is born. In order to reach the international audience and not lose the essence of Walfad at the same time, the band decided to record a bilingual album. Works on lyrics and translations lasted until the last minute. Lyrics-wise the second album of the group from Wodzisław is a poetic and slightly gloomy, autumn story abundant with literal references. The Smutna Pani (Sullen Lady) was created during the last rehearsal before the band entered the studio. During the recording session everybody knew that something really precious was being born. Wojtek, with money earned in a candy factory changed almost the entire guitar set, Kacper played on better drums, Maciej bought a new guitar bass – everything was supposed to be of better quality than on Ab Ovo and it worked out. “An Unsung hero, salty rains&Him” was enthusiastically received both in Poland and abroad, and songs such as a suite Liście, Chocholi Taniec or Łzy Szatana are increasingly popular among listeners. Fantastic reviews in the specialist press (Lizard, Teraz Rock), participation in many radio broadcasts and successful concerts promoting the album – it all made the band to be proclaimed as a new energy of Polish prog rock. Thanks to the second album Walfad successfully fought its way to Polish progressive top-league. What lies ahead the band from Wodzisław Śląski? Concerts, searching, working and conquering the universe.