Voices of the Cosmos 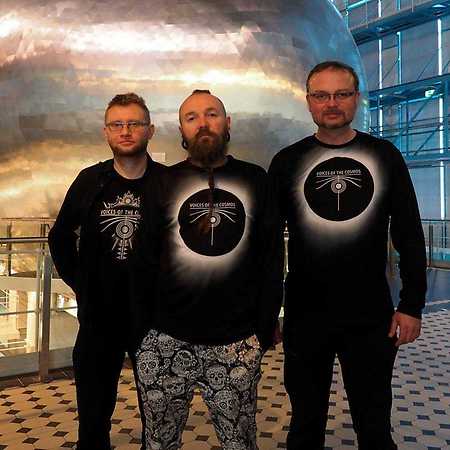 Voices Of The Cosmos  Magnetospheric Chorus

About Voices of the Cosmos

Voices Of The Cosmos is a project created by two sound artists: Rafał Iwański (musician known from HATI, Alameda 5 and Innercity Ensemble, solo performing as X-Navi:Et) and Wojciech Zięba (head of the music publishing house Beast of Prey, editor of the music magazine Hard Art, solo appearing as Electric Uranus) and astronomer Sebastian Soberski, head of the Planetarium and Astronomical Observatory in Grudziądz and radio astronomer at the Astronomy Centre of the Nicolaus Copernicus Copernicus University in Piwnice near Toruń.

Both project members responsible for the sound sphere have extensive experience in the field of electroacoustic music. The creators use original signals and sounds of extraterrestrial origin obtained through radio telescopes (pulsars, planetary magnetosphere, sun, aurora), archival recordings from space missions and signals from space. Instrumental paths composed into rhythms and tones of “cosmic sounds” are rich in sonorism and created with the use of electronic instruments, both digital and analogue, as well as various acoustic objects. The albums Voices of the Cosmos (2011), Voices of the Cosmos II (2013) were enthusiastically received by listeners and received very good reviews. The initiative has also gained recognition and support in the scientific community (Nicolaus Copernicus University, Polish Astronomical Society). Since 2011, the Voices Of The Cosmos project has been presented in cultural and scientific institutions and at music festivals. In January 2019 the last album of the project Voices of the Cosmos III was released.

GoOut.net > Artists > Voices of the Cosmos