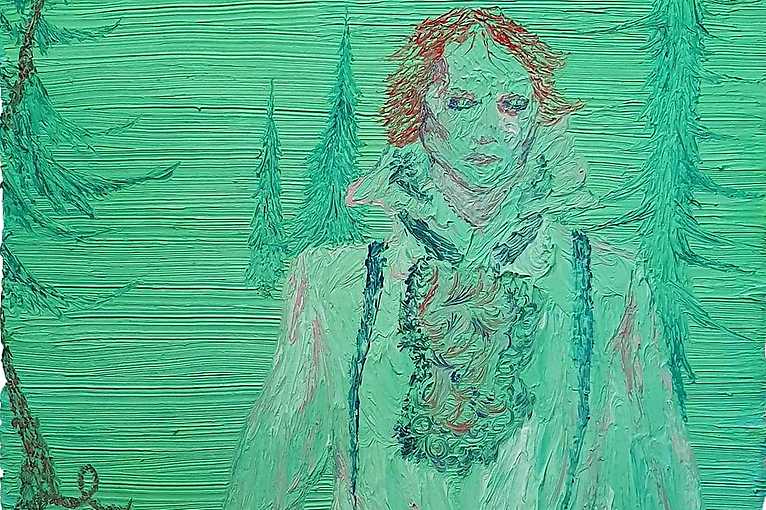 A split is a music album that includes tracks by two separate artists. Split albums differ from “various artists” compilation albums which generally include multiple tracks from multiple artists, instead of several tracks of each artist. Split albums were initially released on vinyl records, with each side featuring music from one of the artists only. Since the early 1980s, the format has been used widely by independent record labels, and artists from punk rock, hardcore, grindcore, black metal, noise and indie rock circles. Splits usually tend to find recognition among underground fans even if the featured artists belong to mainstream. Somehow the success of split albums is most often not of a mainstream-wide.

On the Viola Głowacka’s side we can find a vague amalgam of inspirations – from atmosphere of Exarcheia district, through white trash, soap operas, or simply Camp, to Brasilian queer. All painted in tempera or oil on canvas in a dim, dusky way. They look more like a gouache. Or, on the other hand, like separate panels that represent individual scenes taken from weird adult comic books.
The other side features a realm of Jan Eustachy Wolski. We are in woods and mountains, with a candle, or an axe, wearing jabot, with long nails and hair, on a graveyard. We are somewhere in between New Romantic and Black Metal. And definitely we are beyond time and history, in a distorted echoing loop of Frankenstein and Dracula, with the movies by Paul Morrissey and Andy Warhol in our minds. Colours are intense or corpse-pale, while texture of surfaces is thick almost like a plaster cast.