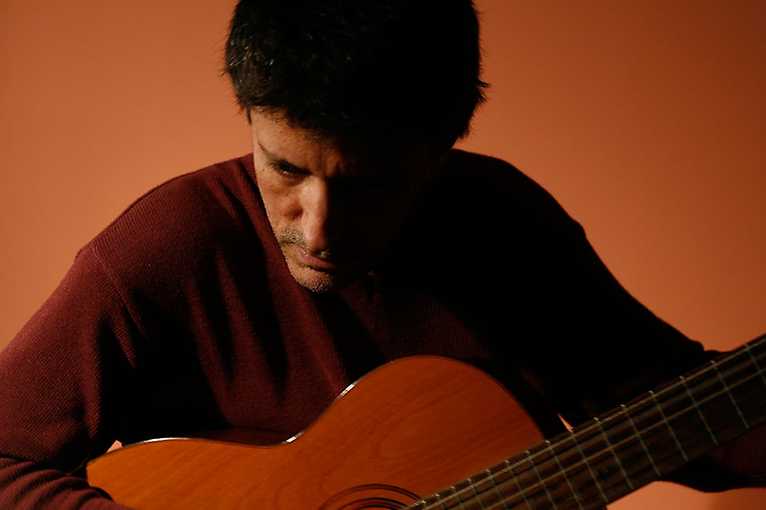 Vinicius Cantuaria was born in the port town of Manaus on the Amazon river, but he and his family soon moved to Rio de Janeiro. He wasn’t yet a teenager when bossa nova came to prominence in Brazil and beyond. The form’s seductive harmonic language was to influence a range of jazz musicians, leading to a boom in jazz/Brazilian fusion in the 1960s. The term bossa, in Brazilian means something like natural talent, or unforced ability. And so it was with Cantuaria – he didn’t so much push himself as ease himself onto the scene, becoming known first of all as a sideman, most notably to the singer and guitarist Caetano Veloso. In the 90’s he moved to New York to learn more about swing right at the source. Another renowned Brazilian composer, Carlos Lyra, once said that bossa nova swings from side to side, while jazz swings from front to back. Cantuarua was able to establis himself in New York thanks to his openness and willingness to experiment. He was bewitched by the downtown scene and established musical relationships with John Zorn, Marc Ribot, Brad Mehldau, and Bill Frisell, as well as David Byrne, Brian Eno, Laurie Anderson, and Ryuchi Sakamoto.

But bossa nova remained the music of his heart. Antonio Carlos Jobim is the recognised master of the form, and the man who wrote the majority of bossa nova hits, and Cantuaria chose to concentrate on Jobim’s repertoire firstly for a concept album, and then for a series of moving solo recitals. His natural talent, together with the musical and life experiences he’d gleaned, helped him fashion a truly absorbing concert experience. Cantuaria interprets Jobim’s pieces with such feeling, and so convincingly, that nothing is left behind.