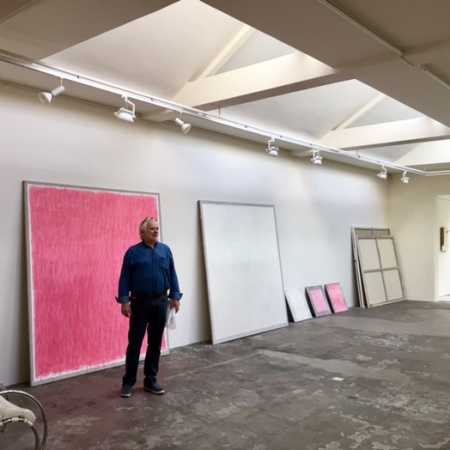 Tomas Rajlich (*1940) has spent a substantial part of his creative life in Dutch exile in direct contact with the American and European radical artistic generations, of which he has become a natural part. Already in 1967, co-founding a concretists Club (with Jiří Hilmár, Radek Kratina and the theoretician Arsén Pohribný) he declared his interest in the strict geometric structures to which he naturally inclined from his studies in Sculpture under the studios of J.Laudov, K.Pokorný and K.Hladik at the Academy of Fine Arts in Prague. Structure became Rajlich’s starting point for the gradual development of his painting strategy that perceived geometry in a broader context. “In the 1970s and 1980s, the artist naturally developed to monochrome painting as well as serial painting. Further development of this work is the work with monochromatic aluminium foil, which still carries a layered painting characteristic of the artist. These works also testify to a certain intellectual outlook that Rajlich has over (his) art,” explains Martin Dostál, curator of the exhibition.