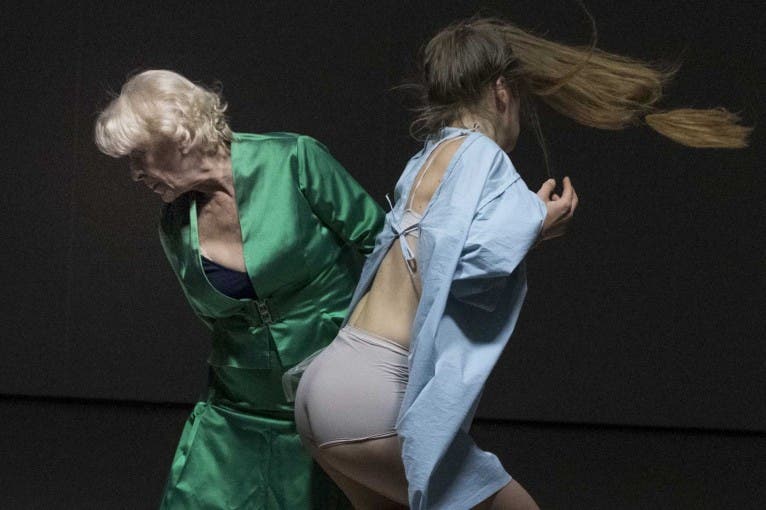 Magda and Zuzanka share their little lives through phone conversations. The first cannot be without the second, while the second is self-absorbed. Why do they still communicate at all, and what do they actually have in common? Fragments of their absurd relationship appear in a kaleidoscope of situations from other lives, lived without recognizing their sense and direction, between fun and powerlessness, narcissism and fear of death. The present alternates with the past, rejection with the desire for closeness. Time passes, the elevator goes up, and the party has to end sometime. We’ve grown old. Does it surprise us?

Performers Hana Varadzinová and Eliška Vavříková created this work together with non-actor seniors, and perform in it alongside them. Involving Prague seniors with no previous experience with creating physical theatre on a professional level led to the creation of a community in which the intergenerational abyss of disregard and disdain that old people in the twilight of their lives often experience was absent. At least within its scope the project thus created a model of coexistence without the discrimination of the elderly that is all too common in today’s society.

Together Forever! is the third part of the Night in the City trilogy, which focuses on revealing contemporary topics that society refuses to see. (The first part of the trilogy, the Whistleblowers performance, had its premiere in 2015; the second part, the performance Disconnected, in 2016). Like the previous parts of the trilogy, Together Forever! is a multilayered stage composition bordering on the genres of movement theatre, video, and documentary.