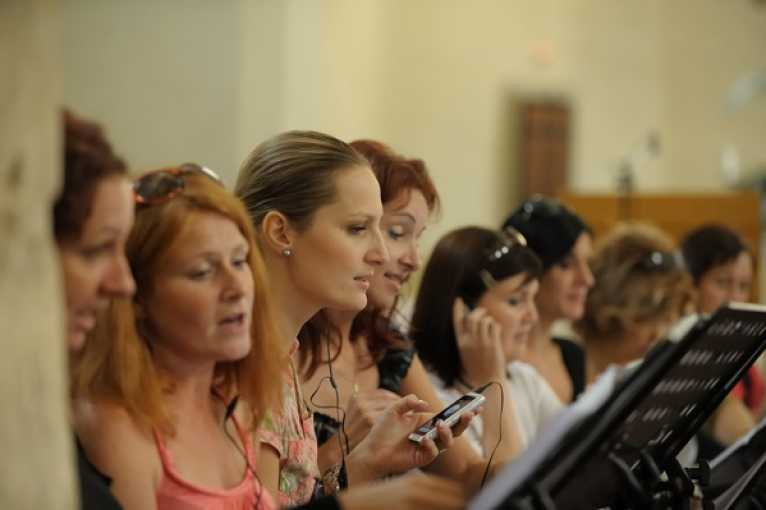 Sixth-tone opera in three acts and seven tableaux for 26 solo voices, mixed choir and orchestra, with a subtitle The Unemployed (op. 50), 1937–1942.

Alois Hába (1893–1973) stands out in music history as on one of its unique figures: both in Czech and international context, he made his mark as the creator and defender of a composition system that aimed to utilize the entirety of the tonal spectrum and free combinations of intervals. His “freedom music” with its athematic compositions in harmonic polyphonic system provided new impulses to music at home and abroad, despite the fact that his theory of quarter-tone, sixth-tone and twelfth-tone music represented a utopia that was later rendered obsolete by the evolution of electronic music and the deployment of modern sound-making technology in general. Hába’s single-mindedness, sense of purpose, creative boldness and wide-ranging contacts abroad held a huge, multifaceted potential for the inter-war Czechoslovakian culture and continued to have a lasting influence on future generations of artists.

Aware of the important role played by combined dramatic/musical works in the development of Czech culture and national self-awareness, Hába also explored the possibilities of modern opera. His quarter-tone work Matka (Mother), for which he also wrote the libretto (drawing on autobiographical motives and set in the region where he grew up), premiered in Munich in 1931. The Czech premiere only came in 1947; when the National Theatre in Prague put on a production in 1964, it was enthusiastically received at Maggio Musicale international music festival in Florence. Hába’s second opera, the twelve-tone Nová země (The New Land, 1935/1936), is based on a short story by Feodor Gladkov, as adapted by librettist Ferdinand Pujman: the work documents social and political thought of the inter-war avant-garde and its opposition to the threat of national socialism. The original production was stopped for fear of political provocation and the opera has only been staged once, in semi-concert version, in the National Theatre in Prague in 2014, receiving a very favorable response.

Hába’s third opera, Thy Kingdom Come, is composed in sixth-tone system and its libretto was co-created by Ferdinand Pujman. Unlike Mother, which specifically requires quarter-tone instruments, Thy Kingdom Come only calls for a sixth-tone harmonium, which can replaced with a keyboard today. Although Hába considered this opera to be the pinnacle of his artistic career, it has never been produced and the composer himself gave up trying. In 1942, when the work was completed, staging it was out of the question, and after the war, the ideology of socialist realism found the opera’s subject matter, influenced by Rudolf Steiner’s antroposophy, dangerously esoteric. Yet the overall message of Thy Kingdom Come is akin to other operas produced in Czechoslovakia at the time: Otakar Ostrčil’s Honzovo království (Jack’s Kingdom), Josef Bohuslav Foerster’s Bloud (The Simpleton), Rudolf Karel’s Smrt kmotřička (Godmother Death) and even Der Sturz des Antichrist (The Fall of the Antichrist) by German-speaking composer and Hába’s student/friend Viktor Ullmann, a work that only premiered in 2014 in Olomouc. All these operas grow out of anti-war sentiment and the ideas of social justice and freedom of thought. Reviving Alois Hába’s Thy Kingdom Come brings the opportunity to witness a document of an outstanding, progressive era in the evolution of Czech music.

In Czech language with English subtitles.