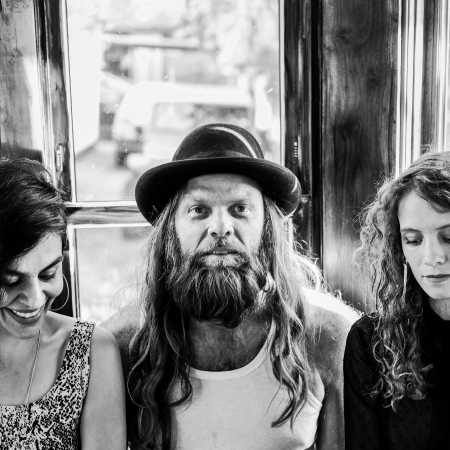 After five years of touring as the percussionist of The Swans, Thor Harris began Thor & Friends in the autumn of 2015 as a vehicle to experiment with a cast of rotating Austin based musicians in the vein of American minimalism. As an instrument carpenter and acoustic polyglot, Thor & Friends is the sound of Harris’ return home — an elongated greeting and ode to his community, woodworking shop and the instruments his hands bring texture too.

With the three core members of Harris, Peggy Ghorbani and Sarah “Goat” Gautier, the expanding and contracting ensemble works within the flux of compositional and improvisational contexts, where the range of tonal color depends on what instrumentalists are joining or absent from the process. They can perform acoustically or with hues of electronic instrumentation, as a stripped down trio or a large ensemble. In addition to drawing on minimalist composers such as Terry Riley and Steve Reich, Thor & Friends amalgamate the diverse influences of Brian Eno, Aphex Twin, Moondog and The Necks through a polyrhythmic center of mallet instruments, primarily marimba, xylophone and vibraphone. Around the core motifs of the aforementioned mallet timbres are shifting streams of everything from processed pedal steel and analog synthesizer to violin, viola, stand up bass, clarinet, duduk and oboe.

The group builds off of the similarities and contrasts of Harris’ past projects and continuing collaborations, which include The Swans, Ben Frost, Bill Callahan, Hospital Ships, Shearwater and John Congelton. The result ushers in a utopian optimism contemporized through 20th century predecessors via the promise of improvising with neighbors and friends and utilizing what and who is around at any given moment.