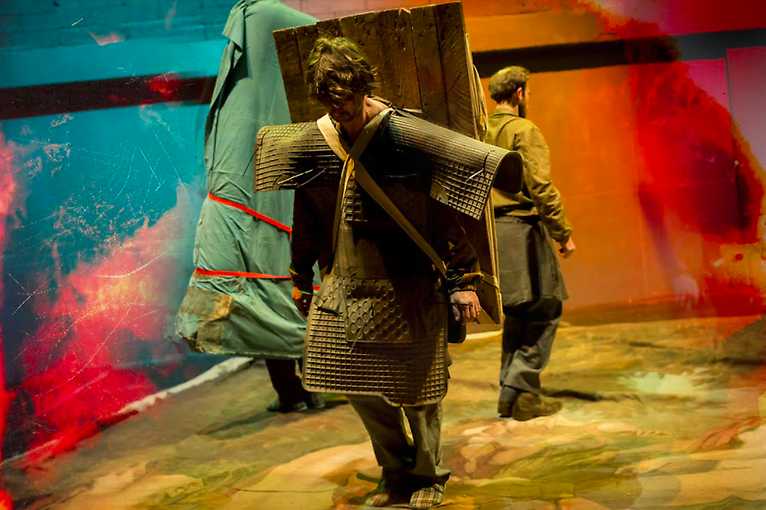 The performance of “The Depth” by Czech art collective Wariot Ideal will be opening the “Bazaar festival”.

We’ll definitely be baking a mask! The rest will be assembled on the head and welded together using a red-hot pan. Or glued together with eggs. Then an Assyrian made with snails. And clothes-iron shoes – thus the need for a circuit breaker. A basket-maker and straw-weaver and their tools and musical instruments. Looks like it’ll be a concert, actually! The Old Testament as a source of inspiration and as support for drilling, grating, and blanching. A life-and-death struggle in shouting and hollering. A conflict over three arrows. Sacrifice as a path towards peace. As long as nothing is underestimated. Let us now eat and drink in order to become one with our roots! Our ancestors are our roots. And we are all balls! (Meaning testes)! We love our ancestors, but we regularly underestimate etiquette and overestimate boot-licking. What a shame… Still, if Job could do it, anyone can! Which probably means us as well. But don’t piss off the tree-demon! Or it’ll be the end of us. Depths where even the gods aren’t so special and we humans don’t always make it to the surface in time. And also theatre, dance, sport, or just hanging around.

Wariot Ideal is a creative collective active on the Czech independent scene since 2009. The group’s core members are mime Vojta Švejda, sound wizard and composer Jan Kalivoda, light designer and scenographer Jan Dőrner and producer Milena Dőrnerová. The group deals in more artistic disciplines than just theatre: film, music, sound and light design and fine art exhibitions. It searches for new possibilities in artistic expression with a dose of comedy, presenting unique works on current events in our lives and times. Its performances are to be seen in Prague and other Czech cities as well as abroad (Germany, Spain, U.S.A., Bosnia and Herzegovina, Italy, Hungary, England, France, Austria, Slovakia, Lithuania and more).