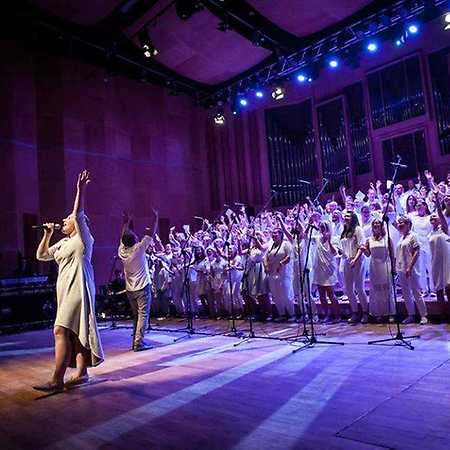 TGD (Third Hour of the Day) is one of the most famous and longest operating bands in Poland performing music with a Christian message. In 1982, as a result of the merger of several church vocal groups, a nationwide youth choir was created. The founder of the group and its first conductor was Janusz Sierla. The expression of the choir, the accompanying instruments and the character of the pieces performed at that time were something new, even controversial, breaking Polish stereotypes concerning Christian music. Over the years, the composition and formula of the ensemble changed, and almost half a thousand people passed through the choir’s ranks. The group gained a large group of listeners and many followers. Currently, TGD’s repertoire is used by many music groups, and “TGD-style” psalms are sung at meetings of Christian communities all over the country.

So far the band has recorded 11 albums, TV concerts (TVP and Religia Tv) and radio concerts (PR “Trójka”). He took part in many music festivals (S.O.S., Sopot Festival), record and television productions, cooperating with, among others, the Polish Radio and Television Institute (S.O.S., Sopot Festival): Elżbieta Skrętkowska, Mieczysław Szcześniak, Grażyna Łobaszewska, Adam Sztaba and DeMono group. The work of TGD is included in the pop-gospel trend. However, it is not an attempt to copy Afro-American music, but the result of combining various inspirations and searching for their own style. Today’s sound of the group is created by a choir, instrumental ensemble and a group of soloists. The repertoire of the group is based on the compositions of the conductor – Piotr Nazaruk.